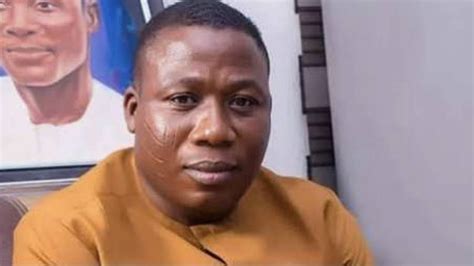 In an interview with BBC Yoruba, Alliyu said the Beninese government needed to allow the activist to seek medical treatment due to ill health.

Alliyu added that the sickness troubling Igboho was not of little measure and he needed both prayers and medical attention.

According to the lawyer, the sickness started when the Department of State Services invaded Igboho’s house in the Soka area of Ibadan, Oyo State.

He said, “Igboho was not diagnosed with this sickness before he was arrested in Cotonou. It was so serious that they had to rush him to the hospital.

“I can’t tell if he has been returned to the prison from the hospital but what I know is, he’s battling ill health and it seems his kidney and lungs are already being affected.

“Even though I cannot tell which part of his body the sickness has really affected, I know it has to do with his internal organs.”

Alliyu said the sickness started after operatives of the Department of State Services invaded Igboho’s house and while the activist was trying to escape the raid.

Salami said: “Sunday Igboho is not sick, however, he got injured during the DSS raid on his house on July 1, 2021.

“Since then, he has not been given adequate medical attention, his health has since deteriorated and that was why he asked that he should be taken overseas for medical checkup.”

Recall that Olayomi Koiki, Igboho’s spokesperson had said his principal was in urgent need of medical attention.

A statement by Koiki titled ‘On behalf of Chief Sunday Adeyemo, aka Igboho’, called on the government of Benin Republic to grant Igboho permission to receive urgent medical attention.

Igboho was arrested alongside his wife in Cotonou, Benin Republic by security operatives in the West African country on July 19 after fleeing Nigeria to evade arrest by Nigeria’s secret police.

The DSS had declared Igboho wanted after its operatives carried out a bloody raid on his residence in the Soka area of Ibadan, Oyo State, killing two people and arresting 12 aides but Igboho escaped.

DSS Public Relations Officer, Peter Afunnaya, had advised Igboho to turn himself in.

However, Igboho’s wife has since been released from police custody while Igboho remains in detention in the West African country.