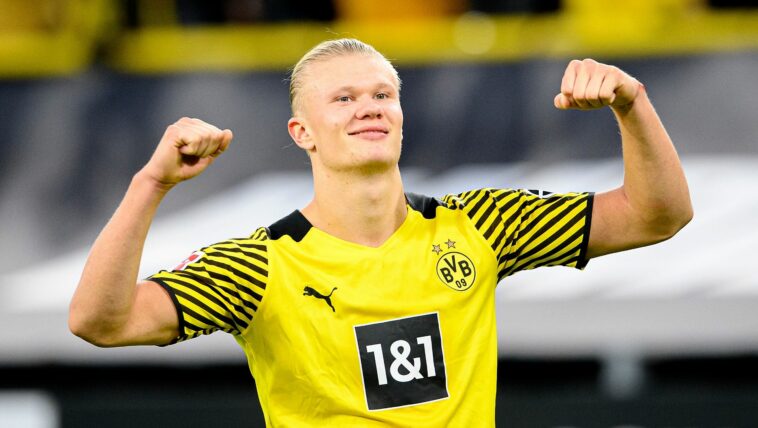 Erling Haaland’s agent Mino Raiola is expected to hold talks with Manchester City in January over a potential move for the 21-year-old next summer.

The Borussia Dortmund striker is one of Europe’s hottest properties, with the likes of Manchester United, Chelsea, Barcelona and Real Madrid all linked with moves.

The Norway international’s contract, which runs until 2024, contains a £64million release clause which becomes active next summer.

And the Times are reporting that Haaland, whose father Alfe Inge played for the club between 2000 and 2003, is one of City’s top targets.

Manager Pep Guardiola is thought to be keen to bring in a world-class No9 after starting the season without one, following their failed pursuit of England captain Harry Kane.

Haaland would certainly fit that bill after scoring a staggering 68 goals in 67 games since joining Dortmund from FC Salzburg in January 2020.

The report indicates City will face stiff competition from rivals United, who have a long-term interest in the striker.

Chelsea attempted to sign him this summer to avoid a bidding war but opted for Romelu Lukaku instead, whilst Raiola and Alfe Inge also travelled to Spain to discuss a potential move with Real and Barca in April.

X
In Focus: Manchester United still lack tools to help Paul Pogba shine…SoccerLiveScorePaul Pogba's form has been one of the bright spots for Manchester United this campaign.The Frenchman equalled the record for most assists in …