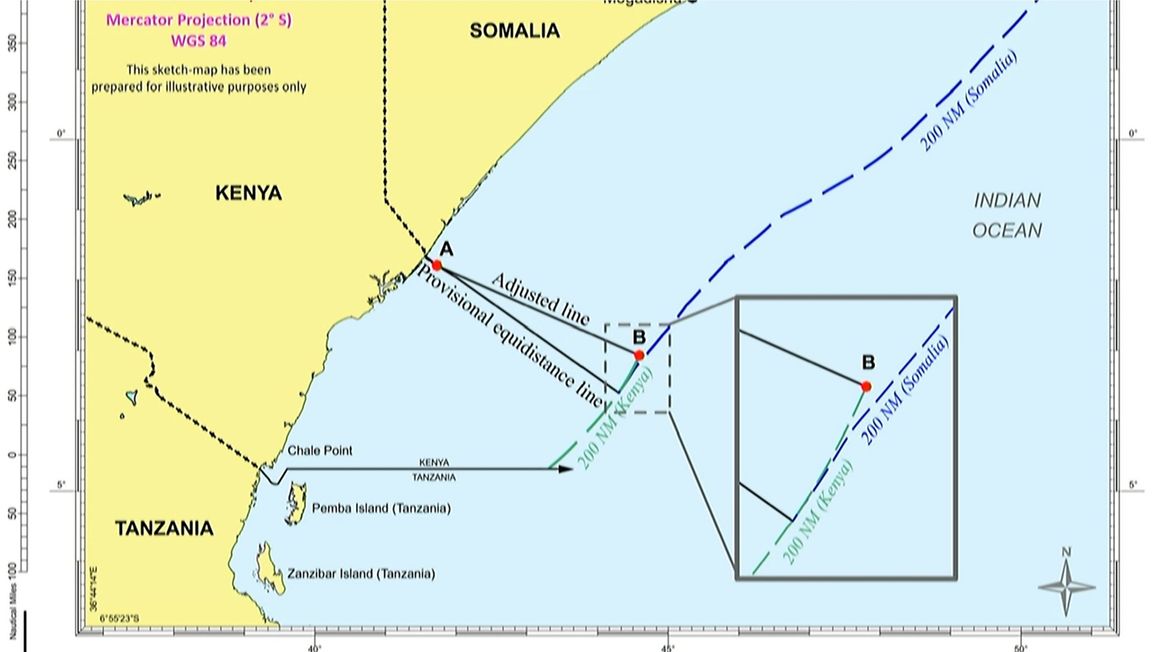 The United Nation’s top court ruled largely in favour of Somalia in a long-running dispute over a maritime border, presenting the latest to the uneasy relations between the two countries.

The International Court of Justice (ICJ) rejected Kenya’s claim that there was an existing agreed maritime boundary between it and Somalia and instead drew a line that split the disputed area into two.

“The maritime boundary between the parties having been determined, the Court expects that each party will fully respect the sovereignty, sovereign rights and jurisdiction of the other in accordance with international law,” the UN Court said in a ruling Tuesday.

The dispute involves a triangle measuring more than 100,000 square km (nearly 40,000 sq miles) in the Indian Ocean that is thought to be rich in oil and gas.

Somalia filed the case in 2014 at the UN’s highest court for disputes between states—seeking a determination on who holds the rights to exploit oil and gas in the deep waters off the East African coastline.

The sea boundary row started in 2012 after Somalia accused Kenya of illegally awarding exploration rights in the waters to multinationals Total and Eni.

“The Court notes that these concession blocks are located entirely or partially north of the equidistance line claimed by Somalia as the maritime boundary. There is no evidence that Kenya’s claims over the area concerned were not made in good faith” the court ruled.

“Under the circumstances, the Court concludes that it has not been established that Kenya’s maritime activities, including those that may have been conducted in parts of the disputed area that have now been attributed to Somalia, were in violation of Somalia’s sovereignty or its sovereign rights and jurisdiction” it added.

Somalia had also argued that Kenya had violated its sovereignty by operating in its territorial waters and demanded reparations.

The judges, however, rejected this argument.

Analysts said Tuesday’s ruling on the Somalia-Kenya maritime dispute could have ramifications on the relations between the nations, which have recently been at loggerheads over several bilateral issues including trade.

“The ICJ court ruling was mercifully not too complicated and was actually very lucid. Somalia got what it wanted. Kenya lost. Let’s calm down and think about how to prevent this ruling from stoking conflict and poisoning bilateral relations,” Rashid Abdi, Horn of Africa analyst at International Crisis Group (ICG) said in a tweet on Tuesday.

Rulings by the world court are final. However, it has no direct means of enforcement and some states have ignored its decisions in the past.

Kenya has previously accused the ICJ of bias and said it will not accept the ruling. In March, Kenya boycotted public hearings in The Hague.

Kenya said on Friday that in addition to withdrawing its participation from the current case, it had joined many other members of the UN in withdrawing its recognition of the court’s compulsory jurisdiction.

“The delivery of the judgment will be the culmination of a flawed judicial process that Kenya has had reservations with, and withdrawn from, on account not just of its obvious and inherent bias but also of its unsuitability to resolve the dispute at hand,” Kenya’s foreign office said.

For the past four decades, Kenya has said a line due east of the point where the two countries meet at the coast represents the maritime border.

Somalia, however, argued in court that the sea frontier should follow on in the same direction as the land border.

The panel of 14 judges sitting in The Hague said that Kenya had not proved that Somalia had previously agreed to its claimed border.

Instead, they drew a new line which has split the disputed area in two.

But with Kenya refusing to recognise the ICJ’s jurisdiction it is not now clear what will happen. The court has no means to enforce its rulings.

In 2009, the two countries had agreed in a memorandum of understanding, backed by the UN, to settle the boundary dispute through negotiation.

But five years later, Somalia said the talks had failed and…

This article originally appeared in The East African

Back to Top
Close
X
Video of Egyptian woman beaten up at work 'for being unveiled' sparks outrage…AfricaAlarabyCAIRO: A video of a woman being beaten at her workplace in northeastern Egypt for being unveiled has sparked outrage in the Muslim-majorit…