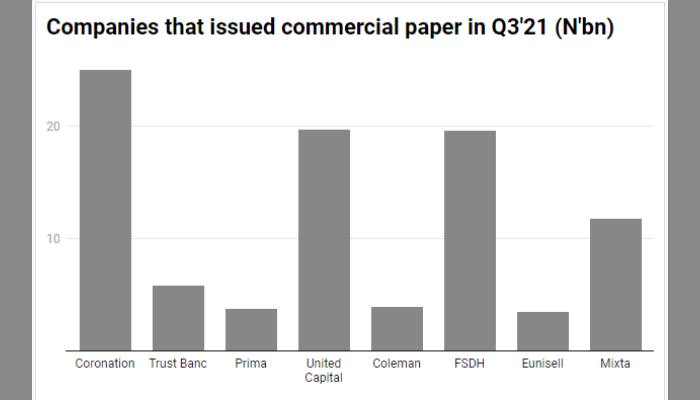 In search of cheap funding, eight Nigerian big companies tapped the country’s low-interest-rate environment to raise a combined N93.02 billion worth of commercial papers (CP) in the third quarter of 2021.

Compared to three years ago when the interest rate was up to 18 percent, Nigeria’s current single-digit interest rate means lower financing costs for corporates that are borrowing to finance their operations.

corporates that are borrowing to finance their operations.

Analysis of the FMDQ data showed that the eight companies that issued the commercial paper in the review period did so at an average of 10.54 percent, 6.47 percentage points less than the 17.01 percent inflation rate reported in August.

Meanwhile, the Central Bank of Nigeria’s Monetary Policy Rate (MPR0), the benchmark against which other lending rates in the economy are pegged is currently at 11.5 percent, as retained by the monetary policy committee in September 2021.

If the companies were to go to banks to borrow the kind of money they raise through CP, they would have likely gotten at least 15 percent. That is even because they are big institutions. If it were smaller companies, they probably would have obtained the cash at an interest rate of between 18 to 20 percent or more.

The proceeds from the issuance will be used to support the issuers’ general corporate purposes, short-term funding requirements and working capital needs, the companies said in a notice.

X
INVESTIGATION:All political parties have national headquarters in FCT, but offic…RifsICIR LOCKED offices. Empty buildings. Absentee workers. Zero workforces. Uncertain addresses. Those are the findings from an investigation conducted b…