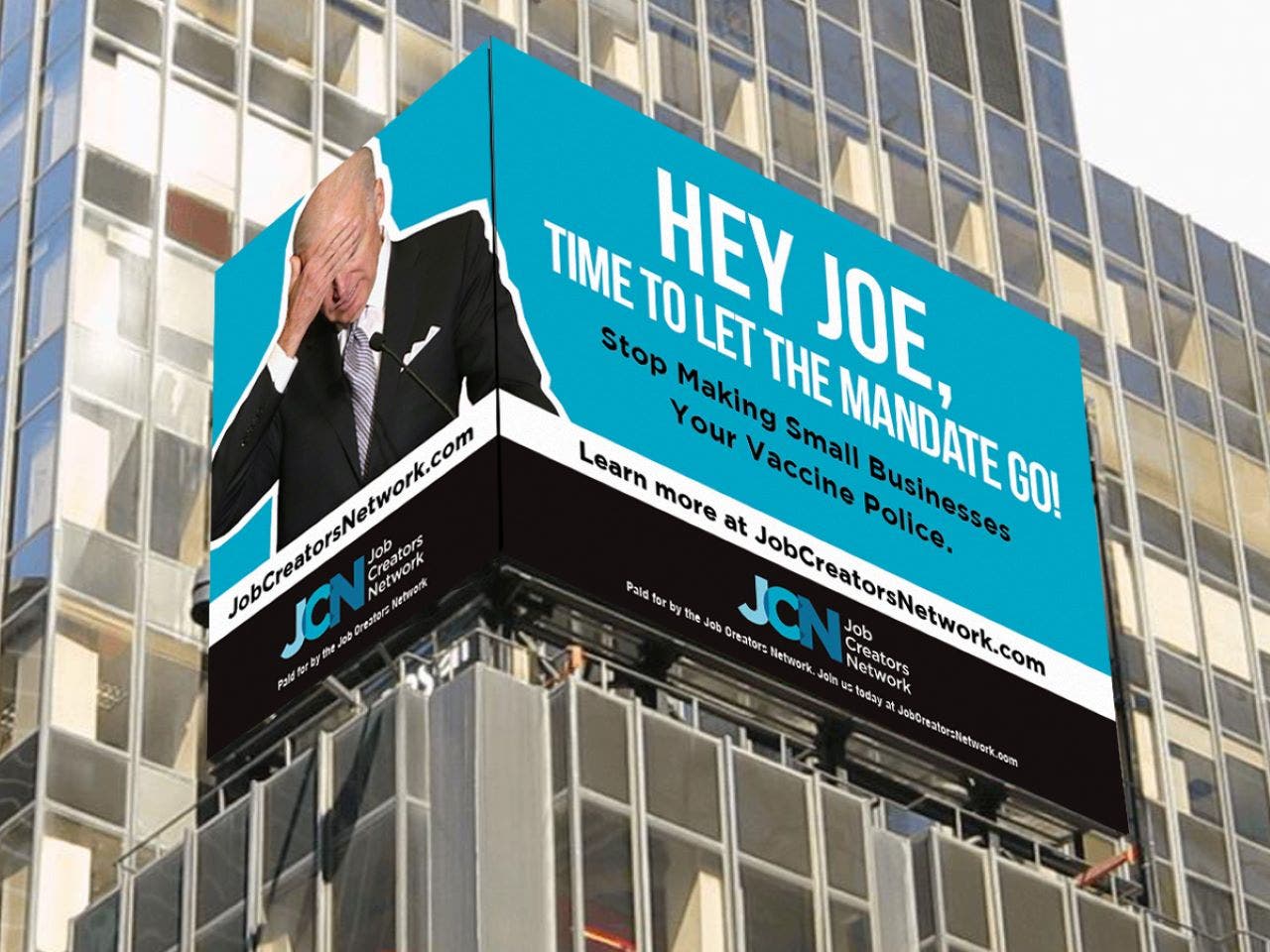 A billboard has popped up in New York City’s Times Square hammering President Joe Biden over his support of coronavirus vaccine mandates.

In a press release, the group said that the sign comes as a direct response to Biden’s controversial announcement in September that he is instructing the federal government to mandate all companies with over 100 employees require their employees to be vaccinated against the coronavirus.

“Small businesses are facing the most challenging period in decades,” Alfredo Ortiz, JCN President and CEO, said in the press release. “Now, Biden’s vaccine mandate threatens to dump fuel on the raging economic dumpster fire with his de facto nationwide vaccine mandate, which will only exacerbate already crippling labor shortages for small businesses.”

Ortiz added, ” Main Street will also be enlisted as foot soldiers to carry out and pay for the overreach of executive power. It’s one thing for a private company to require staff to be vaccinated, but it’s a whole other ballgame when the government mandates it and then forces employers to police and pay for it. JCN is ready to take legal action against the Biden administration on behalf of small businesses if the White House doesn’t change course.”

Vaccine mandates across the country have sparked outrage from many Americans including healthcare workers, federal employees,  police, and firefighters, many of whom have decided to leave the force rather than submit to the requirement.

Hundreds of Michigan healthcare workers quit their jobs rather than take the vaccine. A dozen Massachusetts state troopers have recently stepped down as a result of vaccine mandates and many believe a mass exodus of police officers and firefighters will take place if the mandates continue.

In Los Angeles, 895 city fire personnel, a majority of them firefighters, have signed an intent to sue the city of Los Angeles if they are terminated without due process for not being vaccinated by the Oct. 19 deadline.

Back to Top
Close
X
STEPHEN GLOVER: It's potty for Europe to blame all our supply woes on Brexit…HeadlinesHome | Mail Online A former prime minister of Finland has suggested that the European Union should send aid to Britain when it faces an inevitable sho…

X
Buhari govt inconsiderate, just borrowing away the future of Nigeria without any…HeadlinesNaija News A former Deputy Governor of the Central Bank of Nigeria and chieftain of the African Democratic Congress (ADC), Professor Kingsley Moghalu …