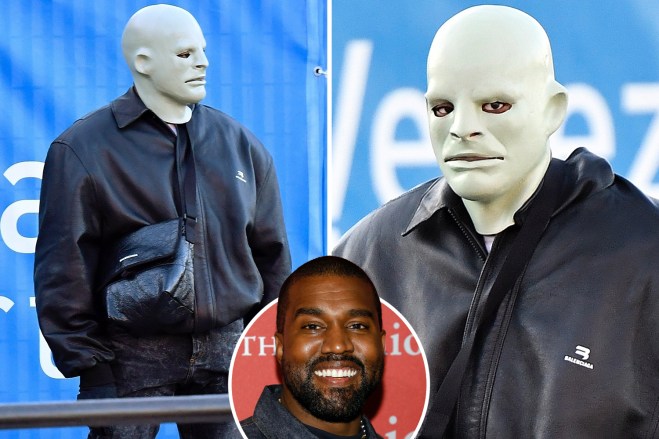 KANYE West wore a creepy mask and an all black Balenciaga outfit after performing at a wedding in Venice, Italy, as his divorce from Kim Kardashian moves forward.

Kanye, 44, went undercover in Venice, after losing the $60m home in his divorce from Kim.

Kanye walked towards the Venice airport in a pull on, off-white mask, covering his entire head – including his ears – with only slits for eyes.

The rapper appeared to be in an all-Balenciaga outfit, with a Balenciaga-logo zip-up leather jacket and black crossbody satchel.

At the wedding the night before, the father of four wore yet another all-black Balenciaga outfit with a dark, bulky mask that covered his entire face.

Fans are saying Kanye had trouble performing with the mask on his face, as they spotted him reaching up to keep the bizarre mask from moving and re-adjusting the straps.

Guests of the star-studded wedding were seen dancing and enjoying the live musical entertainment nonetheless.

Full face and body coverage with designer Balenciaga has continued to be a choice for the separated couple, as the couple surprised fans for choosing to be in matching full body masked suits at the Met Gala even after the rapper’s cheating confession.

According to TMZ, celebrity couple Beyonce and Jay Z were also reported to be at the lavish, star-studded wedding after listing their New Orleans mansion for $4.45m just three months after catching on fire.

Back to Top
Close
X
2Face Idibia goes ‘berserk’ on IG amid family squabbles…EntertainmentRipplesNigerian recording artsite, 2Face Idibia, otherwise known as Innocent Idibia has taken to his Instagram stories to rant about the ongoing pande…