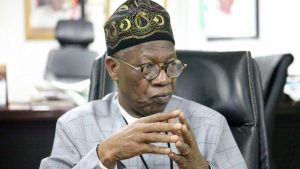 Nigeria’s Minister of Information, Lai Mohammed has been accused of stealing.

Mohammed has been accused of stealing hundreds of millions of naira donated to the governorship campaign of AbdulRahman AbdulRazaq, according to a report by ThisDay Newspaper.

“The Chief of Staff to the Kaduna State Governor called and said Lai gave us an account but it’s not going through, “can you give us another account so we can send you the money?” But I was going to campaign so I said fine.

“I came back two days later and remembered, and I said they should call him and give him an account number. When we called, he said Lai had sorted it out. That one and several. Until today, as we speak, he never told anybody that he collected money.

“There’s a businessman from the South-east. His banker came to me and said his Oga wants to speak with me. I spoke with him and he said he was sending money to me. I said, thank you very much. After the election, he called me to congratulate me.

“When he saw I was just saying ‘thank you’, then he asked if Lai didn’t deliver the money, I asked him what money? He said N100 million,” Mr AbdulRazaq told ThisDay in an interview out on Sunday.

The governor said the unnamed Igbo businessman later called to congratulate him and also mentioned the donation, but he was unable to confirm receipt. The governor said Mr Mohammed has failed to account for hundreds of millions donated he intercepted and pocketed in the course of the campaign.

Mr AbdulRazaq said his emergence as governor in Kwara during the 2019 election was in spite of Mr Mohammed, even though they’re both of the ruling All Progressives Congress. He complained that the information minister humiliated him and worked against his interest in the run up to the exercise.

Mr Mohammed did not return multiple requests seeking comment about the allegations. But the minister has previously denied stealing campaign funds, saying instead that he used his own money to fund Mr AbdulRazaq’s election.

Mr AbdulRazaq’s allegations showed the crisis in Kwara APC was far from over. The party has been in turmoil since its revalidation exercise in which Mr Mohammed…

Back to Top
Close
X
ALERT: ‘Kidnappers’ smoking local sedative to render motorists unconscious…Latest NewsFIJ A Twitter user simply identified as Temmy on Saturday sounded the alarm on the new tactics adopted by kidnappers disguised as Bolt users in Ibadan…