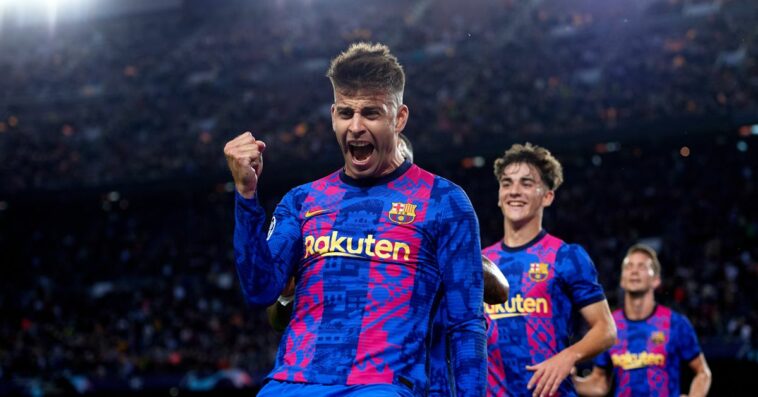 Barcelona are finally on the board in this season’s Champions League group stage and remain alive in the race for second place thanks to a hard-fought 1-0 win over Dynamo Kiev at Camp Nou. Barça were boring from start to finish, but Gerard Piqué’s first half finish was enough to guarantee a crucial victory at home.

Barça attacked from the very beginning, dominating possession and sending bodies forward. Their gameplan was simple: pass the ball from side to side until it reached Jordi Alba, and then Alba would send a cross into the box looking for Luuk De Jong.

Alba was quite accurate with his crosses and De Jong had three wide-open headers, but missed the target in all three. Barça were very difficult to watch and never created a real chance from passing their way through the Dynamo defense, and it was from another Alba cross that Gerard Piqué scored a volley to give Barça the lead.

Kiev offered basically no threat on the counter, and the first 45 minutes were legitimately difficult to enjoy. But Barça were winning at the half, and there was plenty of talent on the bench to make them play better in the second period.

Ronald Koeman made two substitutions at halftime, with Ansu Fati and Philippe Coutinho looking to bring some juice to a lifeless attack. The change worked early on and Fati missed a golden chance to make it 2-0, but Barça slowly but surely faded after 60 minutes.

Dynamo never truly committed any bodies forward and the game continued to develop at a very slow pace with no spark in attack from either side, and nothing continued to happen for the rest of the game.

The final whistle came, and Barcelona have the three points they badly needed to stay alive in the group. But the performance was a giant red flag, and a red-hot Real Madrid is coming to Camp Nou on Sunday. El Clásico will probably not be a lot of fun for Barça fans…

Back to Top
Close
X
Champions League Game Time Thread: Juventus vs. Zenit…Champions LeagueBLACK WHITE READ ALL OVERAh, spending a mid-October night in Russia.For Juventus, this could mean that they further strengthen their status as both th…

X
Barcelona 1-0 Dynamo Kiev: Pique gets Koeman's side off the mark in Champion…SoccerLiveScoreGerard Pique scored the only goal as Barcelona beat Dynamo Kiev 1-0 at Camp Nou to get off the mark with their first victory in this season's…