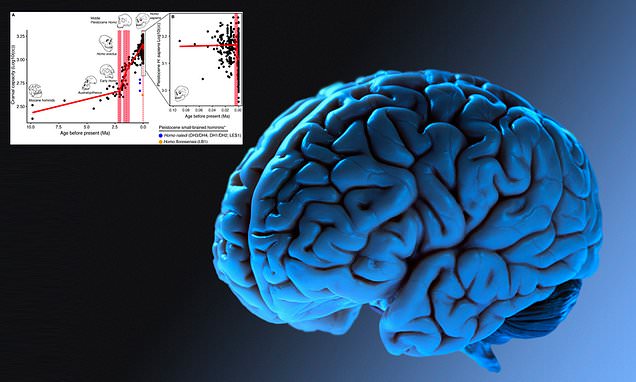 The size of the human brain has changed numerous times throughout human history, but the vital organ decreased approximately 3,000 years ago due to a rise of social circles, a new study finds.

American researchers analyzed 985 fossilized and modern human brains and observed a size increase 2.1 million years ago and again 1.5 million years ago, but a decrease was identified during the Holocene era, which was about 12,000 years ago.

During this time, ancient humans began to form social circles where knowledge was shared or individuals were specialists at certain tasks, which led to the brain becoming more efficient and decreasing in size.

Dr James Traniello, from Boston University and co-author of the study, said in a statement: ‘We propose that this decrease was due to increased reliance on collective intelligence, the idea that a group of people is smarter than the smartest person in the group, often called the ‘wisdom of the crowds.’

Human brain DECREASED in size 3,000 years ago when ancient civilizations started to form social groups and share information with each other, study reveals