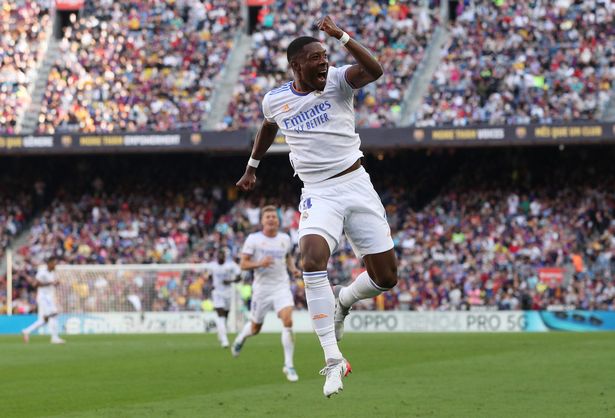 Real Madrid won the first El Clasico since the departure of Lionel Messi as they beat Barcelona 2-1 at the Nou Camp.

The two teams were evenly matched in the opening exchanges, but after Sergino Dest missed a sitter from close range for the hosts David Alaba fired in the opener with a stunning left-footed strike from a tight angle on 32 minutes.

Barca huffed and puffed in the second half but couldn’t find an equaliser, and it was Madrid who came closest to another goal when Karim Benzema was unable to scramble the ball home from practically on the goal-line.

And Lucas Vazquez sealed the win late on with a scruffy finish, although Sergio Aguero got a late consolation to mark his first Barca goal.

The result is a huge one for Madrid and Carlo Ancelotti, and they will have been delighted to get the three points in the first full-house El Clasico since the pandemic.

For Barca, however, it is further disappointment to add to their traumatic time of late.

Here are five talking points from the Nou Camp…

Following wins against Valencia and Dinamo Kiev in the last week, some of the pressure which was mounting on Barca manager Ronald Koeman’s shoulders had eased.

But a defeat at home in El Clasico does little to help any manager’s case, and if president Joan Laporta was waiting for an excuse to wield the axe, this could just do it.

Some eyebrows were raised when Madrid, who have claimed to be cash-strapped, decided to hand astronomical wages of a reported £400,000-per-week and a five-year deal to 29-year-old Alaba this summer.

But the Austrian went some way to proving the doubters wrong today with a brilliant all-action performance to help inspire his side.

Alaba is known for his versatility, and despite being employed at centre-back today he needed no excuse to get forward, frequently bombing on when Madrid struck on the counter-attack.

And he was well worth his first goal for the club, which was a fierce effort that whistled past Marc-Andre ter Stegen before he knew what hit him.

With Alaba’s experience mixed with the youthful vigour of the likes of Vinicius, Madrid could yet go on to achieve great things this season.

Ahead of kick-off, the overwhelming majority of supporters told Mirror Football that Ansu Fati will be the club’s next big star.

The precocious 18-year-old was handed Messi’s vacant No.10 shirt at the start of the season in a huge showing of faith from Barca.

Yet the forward struggled to deal with the weight of expectations on his shoulders today, and was outshone by Madrid’s fellow highly-rated youngster Vinicius Jr before he was withdrawn on 73 minutes.

It wasn’t for a lack of trying, and Fati did get himself in good positions, yet didn’t quite have that killer finishing touch.

If he is to be Messi’s heir, there are still certainly things to improve…