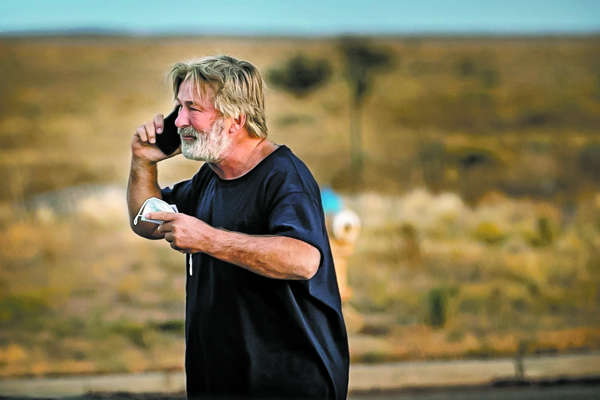 LOS ANGELES — The assistant director on the set of “Rust” where Alec Baldwin fired a prop gun that killed cinematographer Halyna Hutchins had previously allowed an unsafe working environment on productions, according to a prop maker who worked with him.

Dave Halls “at first he seemed like an older, affable first [assistant director] with the usual run of idiosyncrasies, but that facade soon disappeared,” according to prop maker Maggie Goll, who said she was called to work on Hulu’s “Into the Dark” anthology series in February 2019.

“He did not maintain a safe working environment,” Goll said in a detailed statement to NBC News. “Sets were almost always allowed to become increasingly claustrophobic, no established fire lanes, exits blocked … safety meetings were nonexistent.”

According to court records, Halls handed the prop gun to Baldwin before the fatal shooting at the Bonanza Ranch in New Mexico, indicating incorrectly that the weapon didn’t carry live rounds by yelling “cold gun.”

Halls did not respond to requests for comment Friday and Saturday.

Goll, an experienced special effects technician and pyrotechnician, said that in one instance on set, Halls attempted to keep filming even after the lead pyrotechnician had suffered a medical emergency and the set had become unsafe.

In a statement to NBC News, a spokesperson for Blumhouse Television, which produced “Into the Dark” with Hulu, said they couldn’t comment “on personnel matters” when asked about complaints against Halls.

The gun Baldwin used that was supposed to contain blanks had misfired before on the New Mexico set, sources familiar with the situation told NBC News Friday, prompting several crew members to walk off set just hours before the incident that killed Hutchins.

In a statement, Rust Movies Productions said it was not made aware of any official complaints concerning weapon or prop safety on set.

Investigators have not said whether the gun held blanks.

A 911 call alerting authorities about the incident hints at the panic on the set.

“We were rehearsing and it went off, and I ran out, we all ran out,” a female caller told the emergency dispatcher in the recording provided by the Santa Fe County Regional Emergency Communications Center.

When Baldwin pulled the trigger, he killed Hutchins and wounded director Joel Souza, who was standing behind her. Souza, who is recovering after being shot, broke his silence Saturday, saying he was “gutted” by Hutchins’ death.

“There is absolutely no reason that gun safety should be ignored on set, even when it is a non-firing prop firearm,” Goll said.

On the set of “Into the Dark,” Halls “did not feel the same” and neglected to hold safety meetings or make announcements prior to the appearance of a firearm on set, Goll added.

“The only reason the crew was made aware of a weapon’s presence was because the assistant prop master demanded Dave acknowledge and announce the situation each day,” she said.

“The anthology series was a ‘side letter’…

Back to Top
Close
X
Eedris Abdulkareem alleges that Nigerian Govt is covering up for Gumi, Bandits…EntertainmentGistloverReportedly Nigeria’s Attorney General of the Federation claims that Sunday Adeyemo, popularly known as Sunday Igboho is allegedly being spons…