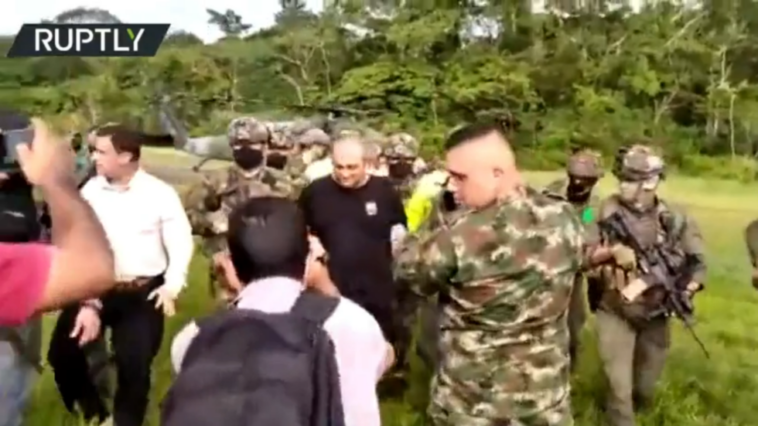 Colombian special forces have captured notorious drug trafficker Dairo Antonio Usuga, known as Otoniel, during a massive operation on Saturday. The alleged boss of the much-feared Gulf Clan had been on the run for over a decade.

Around 500 troops and 22 helicopters were reportedly involved in the raid on Otoniel’s hideout in the jungle area of the Uraba region in the northwest of the country. The force was so overwhelming that even eight rings of security couldn’t save the drug lord from arrest this time.

The operation, in which one police officer lost his life, was carried out based on intelligence provided by the US and UK, according to the authorities.

Later on Saturday, a handcuffed Otoniel was presented to the media, surrounded by armed troops in full gear. In the picture, distributed by Colombia’s armed forces, the 50-year-old was seen sporting high rubber boots usually worn by farmers in the rural areas of the country.

Otoniel’s arrest “is the biggest blow against drug trafficking in our country this century. This hit is only comparable to the fall of Pablo Escobar in the 1990s,” Colombian President Ivan Duque said.

The man is believed to be the boss of the Gulf Clan, which has controlled major cocaine smuggling routes in the jungle, and for years has kept most of northern Colombia in fear. The Gulf Clan has around 1,200 fighters, most of whom are former guerilla members. Among other things, the authorities have accused the drug lord and his henchmen of recruiting minors by force and sexual abuse.

Otoniel escorted by Colombian soldiers inside a helicopter after being captured. © Reuters / Colombian Defense Ministry

The US Drug Enforcement Administration (DEA) had…

X
Colombian drug lord Otoniel to be extradited to US…World NewsBBCColombia has announced that the country's most wanted drug trafficker will be extradited to the US after his capture on Saturday.Dairo Antonio Úsug…