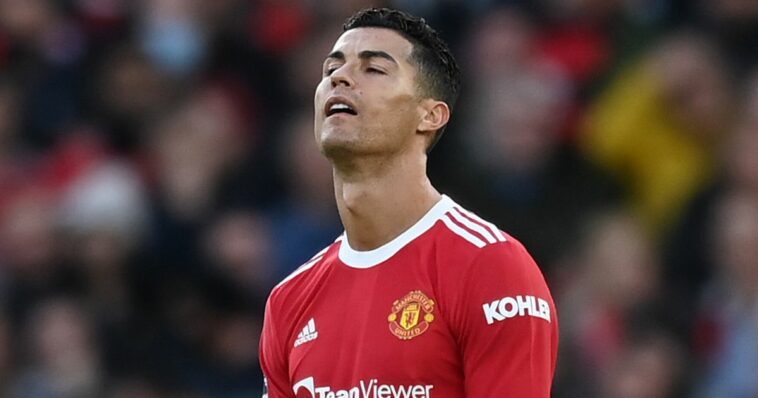 Since Ronaldo returned to Old Trafford at the end of the summer transfer window, he and Greenwood have played alongside each other eight times in all competitions.

During these eight matches, neither player has assisted the other for a goal and Greenwood has found the net just once, having scored three in three before Ronaldo’s second debut.

ESPN report that the duo’s lack of understanding is being blamed on under-fire Ole Gunnar Solskjaer as pressure mounts on the United manager.

They report that a source within the United camp has revealed that Solskjaer’s inability to force the pair to link up more convincingly is the main reason for their lack of understanding.

Their United teammates are understood to have noticed in recent matches that the pair rarely pass to each other, despite Greenwood starting on the right wing with Ronaldo as the lone striker ahead of him in most games.

As a result, Ronaldo is now seen as becoming visibly agitated by the English teenager’s decisions in key goal scoring scenarios.

The former Juventus man reportedly feels that Greenwood often shoots at goal himself instead of passing to a teammate in a better position to score.

Back to Top
Close
X
Man Utd consider sacking Ole Gunnar Solskjaer following Liverpool humiliation…Premier LeagueMirrorThe Red Devils have suffered five defeats in their last nine games, and are without a win in their last four Premier League matches.Having been …

X
Conte is a no-brainer to fix Man Utd and clear the air of misplaced Solskjaer no…Premier LeagueInewsThere is only one course of action open to Manchester United. Appoint the best coach available. Antonio Conte would appear to be that man. Conte …