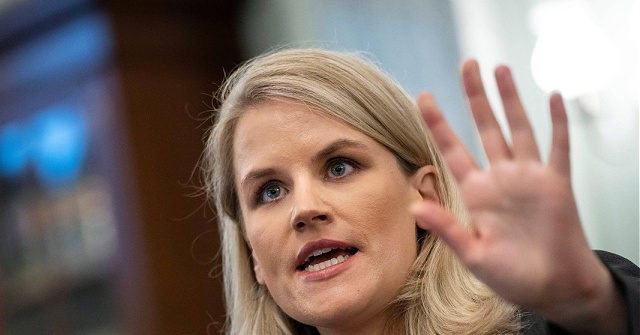 Far-left Facebook “whistleblower” Frances Haugen recently warned against Facebook’s plans to encrypt its Messenger app and Instagram direct messages, claiming that doing so will make it harder to censor content.

The Telegraph reports that far-left Facebook “whistleblower” Frances Haugen has warned against Facebook’s plans to encrypt messages across its various services recently, which would mean that only the users involved in the conversations could view the contents of private messages.

Facebook CEO Mark Zuckerberg testifies via video conference, before the House Judiciary Subcommittee on Antitrust, Commercial and Administrative Law hearing on “Online Platforms and Market Power” in the Rayburn House office Building on Capitol Hill in Washington, DC on July 29, 2020. (

Haugen is reportedly worried that doing so would make it harder for Facebook to censor content across the platform. She has further claimed that foreign actors would be better able to infiltrate the platform if messages were encrypted.

Breitbart News has reported extensively on Haugen and her ideas for fixing Facebook, which include letting her decide who should be censored. Breitbart News reporter Allum Bokhari wrote earlier this month:

Establishment media-backed Facebook whistleblower Frances Haugen testified before the Senate Commerce Committee today, telling lawmakers that they should set up a new regulatory agency to protect against the “harms” of Big Tech (including so-called disinformation and hate speech), and that people like her should get to run it.

According to Haugen, the only possible way to fix the evils of social media (at one point in the hearing, she appeared to blame Facebook for causing the events of January 6th), is to put people like her in charge of regulating it.

While at Facebook, Haugen worked on a project aimed at detecting and disrupting espionage operations, specifically those by Chinese operatives that aimed to implant malware into the phones of Uighur dissidents.

Haugen warned that Facebook’s plans to encrypt its service — which Facebook says is part of its efforts to improve privacy on the platform — are actually an attempt to hide harmful material on the platform. Haugen stated: “End-to-end encryption definitely lets them sidestep and go ‘look we can’t see it, not our problem.’”

A Facebook spokesperson commented on the situation stating: “The reason we believe in end-to-end encryption is precisely so that we can keep people safe, including from foreign interference and surveillance as well as hackers and criminals. We will maintain the ability to receive user reports of suspicious messages, which will help indicate if there is a coordinated abuse of our services.”

Back to Top
Close
X
Analysis: Facebook needs to make big changes to keep critics at bay…In the NewsCNNThe release of "The Facebook Papers" is a huge black eye for the social media company, one that could lead to even more calls from regulators and p…