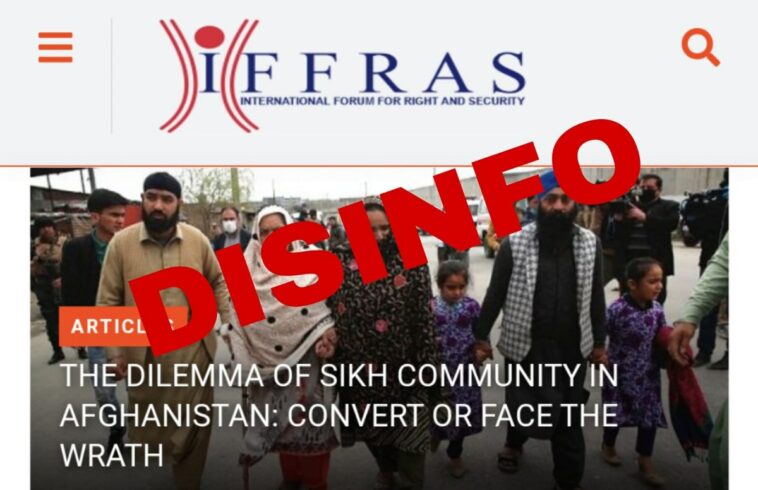 In a 2019 CBC report, IFFRAS was linked to a “huge pro-India fake news network” as a result of an investigation done by the EU DIsinfo Lab

On October 17, 2021, a little-known think tank called the International Forum for Rights and Security (IFFRAS) released a report that stated the Taliban had given an ultimatum to Afghan Sikhs to either “convert or face the wrath”.

Over the next few days, various Indian media sites, including well-known pro-BJP outlets like the Republic and OpIndia, carried the news of the alleged Taliban demand quoting IFFRAS as the source. However, it was ANI that was first to publish a news wire about the report, which was picked up by major outlets like the Times of India.

From there, social media users spread the report and articles, with many using it as an example to either support controversial BJP legislation like the Citizenship Amendment Act (CAA) and National Register of Citizens (NRC), undermine movements like the Farmers’ Protest by suggesting Sikhs should be focusing their efforts on Afghanistan, or denouncing solidarity and interfaith work between the Muslim and Sikh community elsewhere in the world.

However, when Baaz reached out to contacts on the ground in Afghanistan we were told that while the situation there remains tense, the Taliban ultimatum to the Sikh community, as claimed by IFFRAS and others, was never given.

When subsequently speaking with the Times of India the Afghan Sikh and Hindu community went as far as asking those outside Afghanistan to not spread fake news, and instead, focus on continued efforts to evacuate and resettle those remaining in the country.

Upon further investigation, Baaz has learned that IFFRAS is a Canadian-based think tank, which was dissolved in 2014 as per a Federal Corporation Search. On its website, IFFRAS lists its office at 2 Bloor Street West, Toronto, which is a building that is home to multiple consular offices.

In a 2019 CBC report, IFFRAS was linked to a “huge pro-India fake news network” as a result of an investigation done by the EU DIsinfo Lab.

The EU Dinsfo Lab exposed an expansive network of fake pro-India propaganda linked to the Srivastava Group, an Indian corporation run by Ankit Srivastava based out of New Delhi, which used legitimate-looking news portals and think-tanks to “discredit nations in conflict with India in Asia.”

“Using DomainTools, CBC found that the [IFFRAS] website shares the same IP address as the Srivastava Group and EP Today, and that website for the think tank is hosted on Srivastava’s server. The email address used to register the server is a Hotmail address for Srivastava,” CBC wrote at the time.

EU Disinfo Lab also found that ANI, the same agency that first published a news wire for the October 17 IFFRAS report, has been found to regularly amplify articles linked to the fake news network belonging to the Srivastava Group.

IFFRAS has released other poorly…