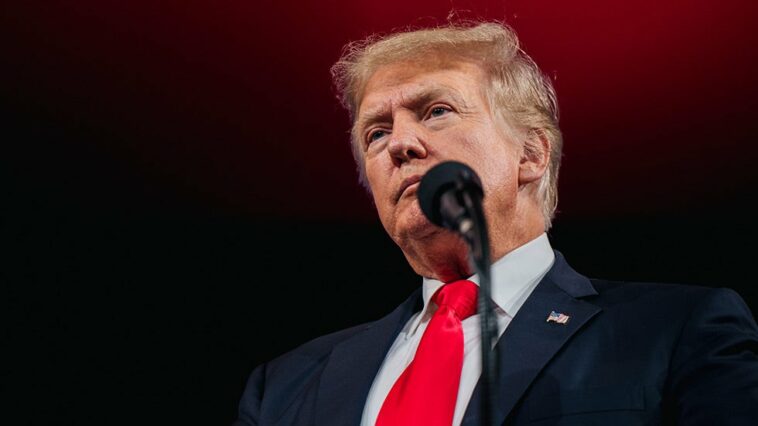 OPINION: Action is needed now to stop a slow-motion coup.

Yet, most Republicans in Congress are still marching along with this farce, which is getting dangerously close to throwing GOP chances of gaining a majority in the House in 2022 over the edge — along with American democracy.

Republican political insiders are in a fright over Trump’s threat to tell their voters to stay home. They saw his lies about fraud depress GOP turnout for Senate candidates in Georgia in two run-off elections in January. They want Trump to quiet down.

But Trump feels he is bigger than the Republican Party. He feels free to crank up the volume.

Trump is now boldly asking followers in Congress to show their devotion to him by derailing the House investigation into the murderous assault on the Capitol by his supporters.

The “real insurrection,” he said last week, came not in the violence at the Capitol but on Election Day 2020.

Trump is also making a stir by trying to stop the facts about his behavior on Jan. 6 from becoming public. He is claiming executive privilege to keep White House records from the time of the insurrection away from Congress.

And he is advising his former aides not to testify about the Jan. 6 attempt to overthrow the government.

The House, along mostly party lines, responded by voting to hold Steve Bannon, one of Trump’s advisors, in criminal contempt for defying its subpoena.

But most House Republicans continue standing by Trump and Bannon.

Incredibly, most Republican voters still dance to the chaotic beat of Trump’s lies.

A majority, 66 percent of Republicans, told a Yahoo News/YouGov poll in August they still believe “the election was rigged and stolen from Trump.” Just 18 percent say they believe “Joe Biden won fair and square.”

This mass deception also serves as a cover for Trump loyalists to pass new state laws to suppress voter turnout and give Trump sycophants control of counting votes.

And now he is threatening to discourage his followers from voting in upcoming elections.

The conservative Wall Street Journal editorial page responded by warning: “Mr. Trump may not be finished making his supporters pay for his narcissism.”

Trump’s “narcissism” requires his followers to ignore that his own attorney general concluded there was no fraud. So did more than 50 federal judges. So did Republican secretaries of state and even a series of election audits.

And there is more.

Revelations in freshly released documents show that Trump pressured his vice president to overthrow the election results. He also pushed loyalists in the Justice Department to do the same.

And he pressured Republican governors, and state legislators, even Republican secretaries of state, to find votes for him and falsely crown him the winner.

Republicans in Congress close their eyes to those facts.

Instead, they are captives — locked into an endless loop of lies run on high-speed repeat between Trump, conservative talk shows, elected officials and Republican voters.

That drumbeat of lies drowns out any counterpoint. It creates a separate reality.

Here is the proof:

A Quinnipiac University poll released last week found 66 percent of self-described Republican voters said they did not consider the January 6 Capitol insurrection to be “an attack on the government.”

That same poll found that 77 percent of Republican voters said they do not hold Trump responsible for it.

It is a matter of history that Trump asked the mob to come to Washington to protest Congress certifying the election. He spoke to the crowd before they attacked Congress.

Cheney is one of two Republicans willing to defy the mob-think on the right by serving on the Jan. 6 House Committee:

“All of us as elected officials must do our duty to prevent the dismantling of the rule of law,” Cheney said last week, “and to ensure that nothing like that dark day in January ever happens again.”

Trump doesn’t want an election. He wants to claim he is a victim of another stolen election.

Talk show host Bill Maher recently warned that Trump is engaged in “a slow-moving coup.” He predicts that Trump, if he runs in 2024, will claim victory no matter the final vote tally — and this time the state and local officials who stopped him will be gone.

There is only one way to stop Trump’s coup…