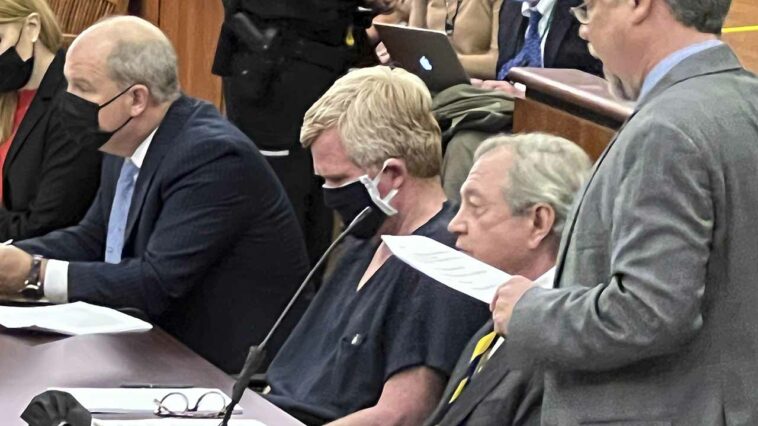 Disgraced South Carolina legal scion Alex Murdaugh is scheduled to appear in court Monday amid a new push to freeze the assets of his son, Buster Murdaugh, who was allegedly spotted gambling at a Las Vegas casino last week hours after his father was denied bond and ordered to undergo a psychiatric evaluation.

Lawyers representing the victims of a 2019 boat crash where Alex Murdaugh’s since-murdered younger son was allegedly behind the wheel are asking a South Carolina court to prevent the surviving, elder son, Buster Murdaugh, from disposing of the family’s financial assets while his father sits in jail.

This comes as the law firm founded by Alex Murdaugh’s great-grandfather also reached a settlement with the heirs of housekeeper Gloria Satterfield.

Alex Murdaugh has improperly “transferred, sold, encumbered or otherwise disposed of assets,” two separate filings made in Hampton County Friday allege. He recently appointed his 26-year-old son, Buster Murdaugh, as his power of attorney on Sept. 16. Since then, his son executed a satisfaction of a mortgage with a face value of about $970,354 on a 42-acre property in Hampton and Colleton Counties on Sept. 23.

Last week, South Carolina Circuit Judge Clifton Newman denied bond for Alex Murdaugh on charges alleging he stole more than $3.4 million in settlement funds from the wrongful death lawsuit related to housekeeper Gloria Satterfield’s death. At last Tuesday’s hearing in Richland County, state prosecutor Creighton Waters, with the South Carolina Attorney General’s Office, outlined how Alex Murdaugh allegedly used the settlement money to pay a $100,000 credit card balance in his name, transfer more than $300,000 to his father, and transfer more than $735,000 to himself.

Mark Tinsley, a lawyer representing Renee Beach, the mother of 19-year-old Mallory Beach, who was killed in the boat crash, filed an injunction Friday in order to protect potential future settlements in his client’s wrongful death lawsuit against the Murdaughs, as well as the bar and convenience store that allegedly provided underage teenagers with alcohol the night of the crash. Lawyers for Connor Cook, another passenger who was seriously injured in the crash, also asked the Hampton County court to freeze Alex and Buster Murdaugh’s assets in a filing of their own Friday.

“Alex Murdaugh has engaged in repeated dishonesty, deception and fraud. He has shown that he will go to extraordinary lengths to misappropriate, steal, transfer or otherwise dispose of money in a manner that benefits him or his family, with complete disregard for the interests of third persons,” Tinsley writes. “Only part of Alex Murdaugh’s complex financial maneuvers are known. Significant questions remain concerning where his assets have gone and when such assets were transferred or disposed.”

Alex Murdaugh attends a bond hearing in the Richland Judicial Center in Columbia, S.C., Tuesday, Oct. 19, 2021. Murdaugh is in court on two felony charges of obtaining property by false pretenses. He spent five days in jail after his arrest Thursday at a drug rehab center near Orlando, Florida. (AP Photo/Lewis M. Levine, Pool) ( )

Friday’s filings include a photo of a masked man at a blackjack table, who the lawyers for Beach and Cook claim to be Buster Murdaugh, at The Venetian Resort & Casino in Las Vegas this month. When asked about the photo directly, Murdaugh’s attorney, Dick Harpootlian, told Fox News Digital, “We are not commenting on anything regarding this case.” Fox News Digital has not independently verified the authenticity of the image.

The court documents list other alleged attempts to sell off assets. Alex Murdaugh’s interest in Green Swamp Club Inc., a 7,000-acre hunting club in Jasper County, was sold on Oct. 1. His motorboat was also listed for sale online for $115,000.

X
Juan Williams: Trump is killing American democracy…OpinionThe HillBy Juan WilliamsOPINION: Action is needed now to stop a slow-motion coup.Yet, most Republicans in Congress are still marching along with this …