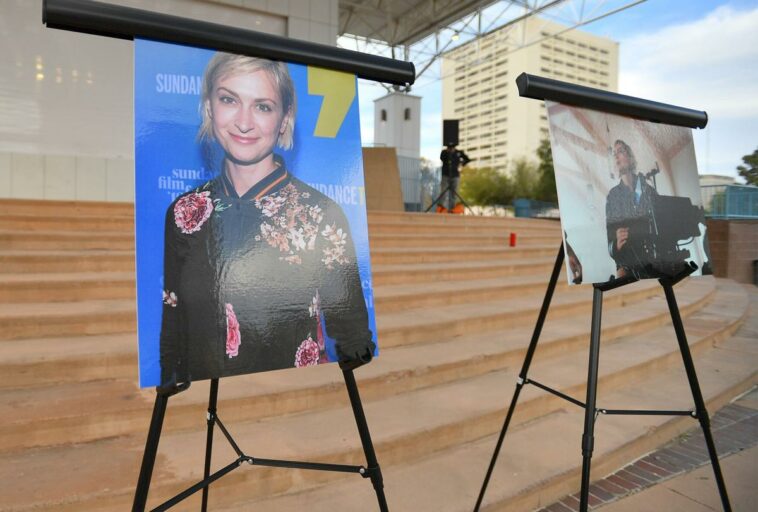 Actor Alec Baldwin was practicing removing a revolver from its holster and aiming toward the camera during rehearsal for the movie “Rust” when director Joel Souza heard “what sounded like a whip and then a loud pop,” according to a search warrant obtained by the Los Angeles Times on Sunday night that also provided grim new details about the final minutes of cinematographer Halyna Hutchins’ life.

In the newly released document Souza said someone identified the weapon as a “cold gun,” meaning it did not have any live rounds. But instead the gun discharged, striking Hutchins in her chest and Souza in his right shoulder, according to a Santa Fe County, N.M., sheriff’s detective’s affidavit used to obtain a search warrant. Hutchins was pronounced dead at an Albuquerque hospital.

Souza’s statement to the detective offered a new window into the on-set shooting Thursday that has left Hollywood reeling and calling for safer working conditions on sets.

The shooting took place after six members of the film’s crew walked off the set after complaining to the production company about payment and housing, camera operator Reid Russell told Det. Joel Cano. The affidavit offered the most detailed chronology yet of an unfolding tragedy.

The day started late because the production hired another camera crew and was working with only one camera, Souza told the detective.

Souza said three people were handling the gun for the scene: armorer Hannah Gutierrez Reed, then assistant director Dave Halls, who handed the gun to Baldwin, the affidavit said.

Halls had taken one of three prop guns set up by Gutierrez Reed on a cart left outside the structure because of COVID-19 restrictions, the affidavit said. Halls did not know live rounds were in the gun when he handed it to Baldwin, and Halls yelled “cold gun,” according to the affidavit.

Souza said cast and crew were preparing the scene before lunch but then had a meal away from the rehearsal area around 12:30 p.m., according to the affidavit. When they returned, Souza said, he wasn’t sure if the gun was checked again, the affidavit said.

“Joel said as far as he knows, no one gets checked for live ammunition on their person prior and after the scenes are being filmed,” the affidavit said. “The only thing checked are the firearms to avoid live ammunition being in them. Joel stated there should never be live rounds whatsoever, near or around the scene.”

When they came back from lunch, a creeping shadow prompted the camera to be moved to a different angle, Russell said in the affidavit. As Baldwin was explaining how he was going to draw his gun and where his arm would be when he pulled the gun from the holster, it discharged, Russell said.

Souza said he was looking over Hutchins’ shoulder when the gun discharged. Hutchins grabbed her midsection, stumbled backward and “was assisted to the ground,” Souza told the detective…