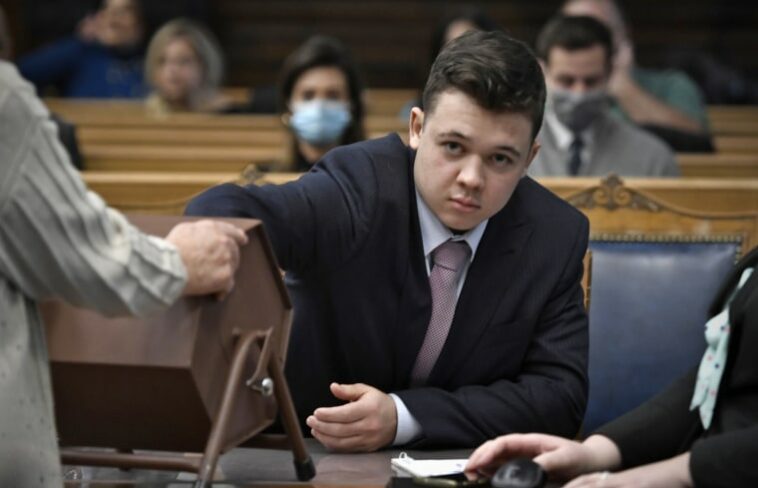 Kyle Rittenhouse on Tuesday randomly selected the seven women and five men who will decide whether he should be held criminally responsible for gunning down two men during a social justice protest in Wisconsin last year.

The Kenosha jury was picked from a pool of 18 people who sat through two weeks of testimony and arguments in a case that’s drawn national attention and sparked debate on gun rights and race.

Rittenhouse himself randomly drew six juror numbers out of a tumbler, which resulted in the 12 selected to decide his fate.

Rittenhouse carefully placed those pieces of paper on the defense table before a court official collected them and showed them to prosecutors.

All but one juror appeared to be white, with one man apparently a person of color.

As jurors were sent away to deliberate, Judge Bruce Schroeder told lawyers on both sides to stay within 10 minutes of the courthouse in case the panel has a question they’ll need to debate.

Schroeder later told reporters he’d give all parties about an hour of notice between the time jurors reach their verdicts and having those findings read out loud in court.

The judge also said he wouldn’t set a time on when deliberations needed end on any given day. During the trial, testimony usually ended at about 5 p.m. on most days.

Rittenhouse was 17 when he joined other armed volunteers who were protecting private property in Kenosha during the Aug. 25, 2020, social justice protest following the police shooting of Jacob Blake, a Black man.

Back to Top
Close
X
EXPLAINER: How the Rittenhouse jury was narrowedRifnote UpdateAPKENOSHA, Wis. — Kyle Rittenhouse played a direct role Tuesday in choosing, albeit randomly, the final 12 jurors who are deciding his innocence or gu…