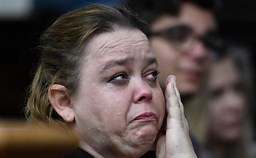 Kyle Rittenhouse’s mother is asking for donations to cover her son’s legal fees.

In an email seen by CNN on Tuesday, Wendy Rittenhouse asked her son’s supporters for money to cover his legal fees for November.

“Both the prosecution and my son Kyle’s defense team have finished their closing arguments and I am beyond nervous,” wrote Rittenhouse in the email, per CNN. “We have been fighting an extremely uphill battle from the beginning, but with the support of thousands of our fellow Americans we have put up a big fight.”

Rittenhouse estimated that her son’s legal costs for November would be around $110,000, per the email.

Kyle Rittenhouse, 18, is on trial for fatally shooting Joseph Rosenbaum and Anthony Huber, and injuring Gaige Grosskreutz, during the August 25 Black Lives Matter protests in Kenosha, Wisconsin, last year. He has pleaded not guilty and his attorneys claim he acted in self-defense. He faces five felony charges, including first-degree intentional homicide. A 12-person jury panel began deliberating Kyle Rittenhouse’s verdict on Tuesday morning.

Wendy Rittenhouse has been outspoken in her defense of her son, claiming President Joe Biden “defamed” her son by suggesting in a tweet last year that he was a white supremacist.

“When I saw that I was shocked, I was angry. President Biden doesn’t know my son whatsoever, and he’s not a white supremacist,” she said. “He’s not a racist. And (Biden) did that for the votes. And I was so angry for a while at him and what he did to my son, he defamed him.”

Insider reported in June that the Rittenhouse family had raised $464,111 from both the FreeKyleUSA fundraising drive and through the Milo Fund LLC, a fundraising conduit for Rittenhouse named after his dog. In June, the fund said it had spent $362,050 of the amount “in case-related expenses for attorneys fees, investigators, legal consultants, subject matter experts, and security.”

Back to Top
Close
X
Kyle Rittenhouse conducts random draw, seating 7 women and 5 men for his jury…Rifnote UpdateNBC NewsKyle Rittenhouse on Tuesday randomly selected the seven women and five men who will decide whether he should be held criminally responsible fo…