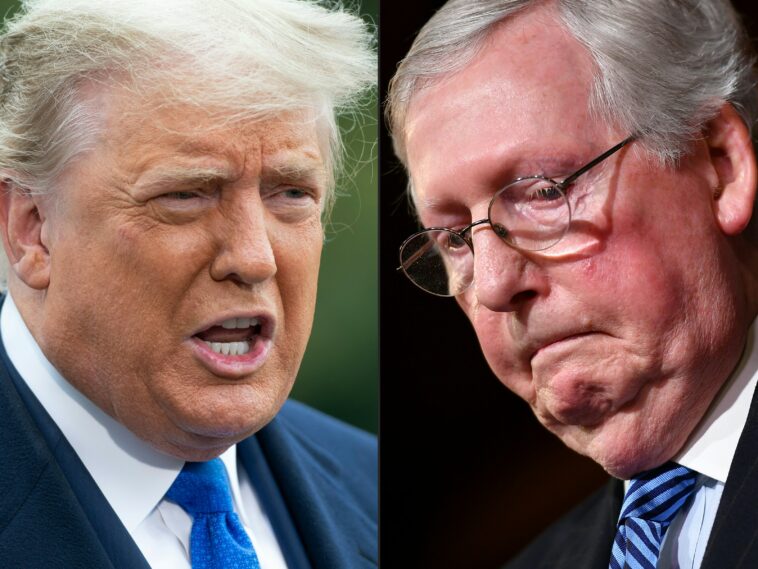 Former President Donald Trump is calling on Senate Minority Leader Mitch McConnell to resign if President Joe Biden‘s Build Back Better legislation passes and has vowed to withhold his endorsement from any Republicans in Congress who vote in favor of the social spending package.

McConnell has had a target on his back since he blamed Trump for the Capitol riot and the former president has chastised him for being an ineffective leader who allows the Democrats‘ agenda to move forward. In August, McConnell and 18 other Senate Republicans voted in favor of a $1 trillion infrastructure package, a staple of Biden’s presidency, which the president signed into law on Monday.

Democrats now have their eye on passing Biden’s Build Back Better Act, a social spending package that Republicans have railed against being costly and full of socialist policies. On Wednesday, Trump called on McConnell to do everything in his power to stop the bill from becoming law.

“McConnell is a fool and he damn well better stop their ‘Dream of Communism Bill’ and keep his Senators in line, or he should resign now, something he should have done a long time ago,” Trump said in a statement. “Any Republican in the House or Senate who votes for this bill will never get a Trump endorsement…

Back to Top
Close
X
‘QAnon Shaman’ gets more than three years in jail for role in Capitol riot…United StatesNY PostThe so-called “QAnon Shaman,” known for storming the US Capitol in a coyote-fur headdress and American-flag face paint, was sentenced to 41 mon…