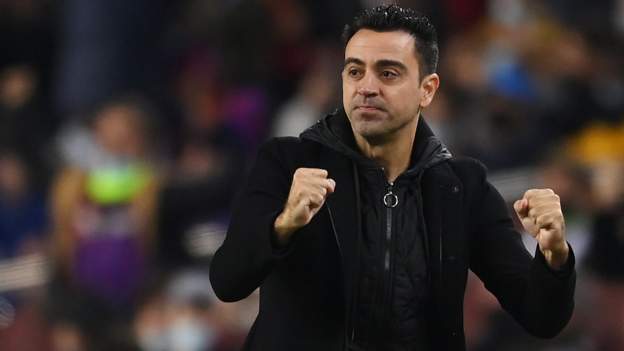 New Barcelona manager Xavi celebrated his first game in charge at the Nou Camp with a slim derby victory over Espanyol in La Liga.

Although the home fans were able to claim bragging rights over their city rivals, the visitors could easily have won the game having wasted numerous chances in the second half.

Xavi eventually saw his side take the lead seconds after the restart through a Memphis Depay penalty.

The win puts Barca sixth in the table.

Xavi, who played 767 games and won 25 titles with the Catalan giants in his 17 years in the first team, had to wait two weeks to take the reins at the club he calls “home” due to the international break.

The Spaniard saw his side create an opening after 13 minutes after Jordi Alba’s low cross was met by 17-year-old debutant Ilias Akhomach but the teenager blasted his shot high and wide over the crossbar.

The hosts continued to apply pressure on Espanyol but attempts by Sergio Busquets, Depay and the impressive Gavi were either not taken or saved by goalkeeper Diego Lopez.

A breakthrough for Barca finally came when Leandro Cabrera brought down Depay on 46 minutes. The Netherlands forward sent Lopez the wrong way to put the home team in control.

However, Barca were unable to dominate in the same way they had done in the first half and as the clock tick towards full time, Espanyol suddenly tested their shaky defence.