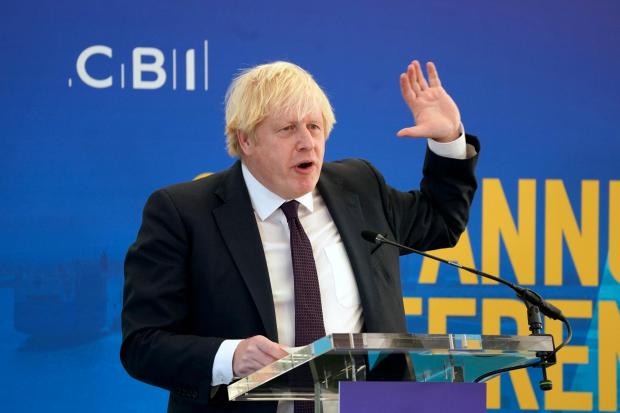 BORIS Johnson is “well”, Downing Street has insisted after the Prime Minister delivered a bizarre rambling about Peppa Pig World during a speech to the CBI conference.

In an address which was supposed to focus on green growth and include policy announcements, Johnson instead made headlines by announcing the cartoon character theme park was his kind of place, comparing himself to Moses and impersonating a car engine revving.

Journalists asked the Prime Minister after the 20-minute speech whether he was doing okay, but he was insistent that he got his points across well.

“He has given hundreds of speeches,” he went on. “I don’t think it’s unusual for people on rare occasions to lose their place in a speech.”

He said: “The Prime Minister, as you have seen from Cabinet, is focused on the issues that we face as we come up to the winter months and delivering on important changes like social care.”

Asked whether Johnson had a core group of ministers around him to offer advice, the spokesman said: “The Prime Minister has an entire Cabinet to draw on who provide advice, as you would expect.”

The spokesman said he “wants people to be able to speak freely and give their views” around the Cabinet table.

The speech to business leaders did not go down well within Johnson’s own party, especially after weeks of Tory sleaze headlines dominating the news agenda.

Senior Tory Jeremy Hunt said it had “not been a great month” for the Government, “not just on trivial issues like speeches going wrong but on much more serious issues like parliamentary standards”.

The spokesman would not be drawn on “anonymous source quotes” about Johnson’s performance on Downing Street.

In a sign of the questions being asked about Johnson…

This article originally appeared in The National

X
North Korean sentenced to execution over having copy of Squid Game…World NewsDaily MailA North Korean nan is to be executed for bringing back a copy of Netflix's Squid Game into the country. The smuggler, a student, is sai…