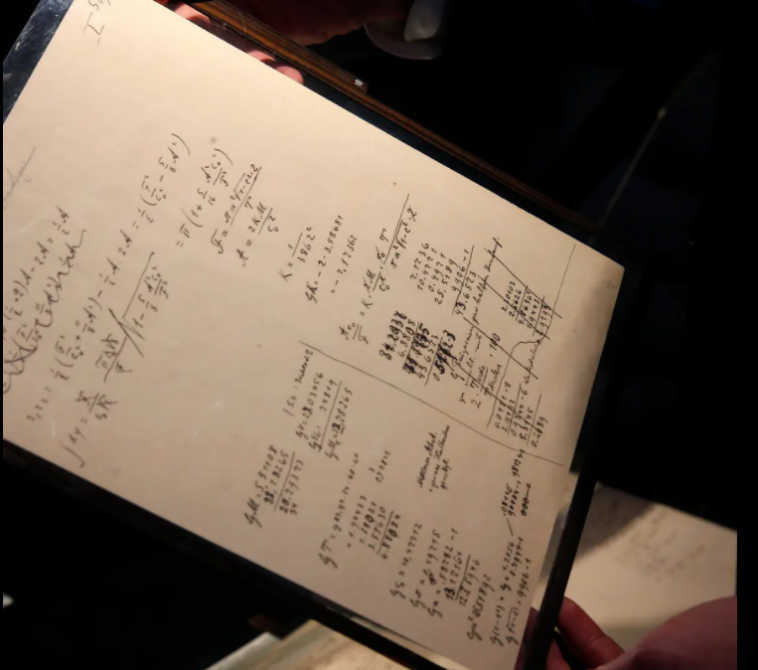 Albert Einstein’s handwritten notes on the theory of relativity fetched a record €11.6m (£9.7m) at an auction in Paris on Tuesday.

The manuscript had been valued at about a quarter of the final sum, which is by far the highest ever paid for anything written by the genius scientist.

It contains preparatory work for the physicist’s signature achievement, the theory of general relativity, which he published in 1915.

Calling the notes “without a doubt the most valuable Einstein manuscript ever to come to auction”, Christie’s – which handled the sale on behalf of the Aguttes auction house – had estimated prior to the auction that it would fetch between €2m and €3m.

The 54-page document was handwritten in 1913 and 1914 in Zurich, Switzerland, by Einstein and his colleague and confidant Michele Besso, a Swiss engineer.

Christie’s said it was thanks to Besso that the manuscript was preserved for posterity. This was “almost like a miracle”, it said, since Einstein would have been unlikely to hold on to what he considered to be a simple working document.

Today the paper offered “a fascinating plunge into the mind of the 20th century’s greatest scientist”, Christie’s said. It discusses his theory of general relativity, building on his theory of special relativity from 1905 that was encapsulated in the equation E=mc2.

Einstein died in 1955 aged 76, lauded as one of the greatest theoretical physicists of all time. His theories of relativity revolutionised his field by introducing new ways of looking at the movement of objects in space and time.

In 1913 Besso and Einstein “attacked one of the problems that had been troubling the scientific community for decades: the anomaly of the planet Mercury’s orbit”, Christie’s said.

This initial manuscript contains “a certain number of unnoticed errors”, it added. Once Einstein spotted them, he let the paper drop, and it was taken away by Besso.

“Scientific documents by Einstein in this period, and before 1919 generally, are extremely rare…

Back to Top
Close
X
Can lobsters and octopuses feel pain? Scientists say yes, and the U.K. is listening…ScienceNBC NewsThe British government is reforming its animal welfare laws after Brexit, including a bill that would formally recognize some animals’ ability…

X
Lobsters, crabs and octopuses will now receive welfare protection as ‘sentient b…ScienceThe report outlines recommendations for best practices to reduce animal cruelty and suffering By Rasha Aridi According to a new report commissioned by…