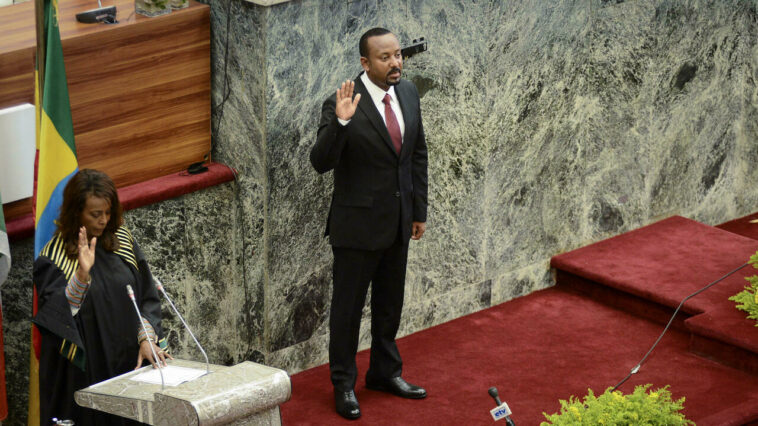 Ethiopia’s Nobel Peace Prize-winning prime minister has gone to the battlefront, his government announced Wednesday, after the leader said martyrdom might be necessary in the yearlong war with rival fighters approaching the capital.

State media showed no images of Abiy Ahmed, a 45-year-old former soldier, and his spokeswoman Billene Seyoum dismissed a request for details on his location as “incredible.” He arrived at the front Tuesday, according to a government spokesman.

Tens of thousands of people have died in the war between Ethiopian federal and allied troops and fighters from the country’s Tigray region. The prospect of the ancient nation breaking apart has alarmed both Ethiopians and observers who fear what would happen to the often turbulent Horn of Africa at large. Countries including France, Germany and Turkey have told their citizens to leave immediately.

Abiy was awarded the Nobel Peace Prize just two years ago for sweeping political reforms and for making peace with neighboring Eritrea. His trajectory from winning the Nobel to now potentially heading into battle has shocked many.

But a move to the front would follow the tradition of Ethiopian leaders including Emperor Haile Selassie and Emperor Yohannes IV, who was killed in battle in 1889, said Christopher Clapham, a retired professor associated with the University of Cambridge.

“It strikes me as a very traditional Ethiopian exertion of leadership,” Clapham said. “It might be necessary to rescue what looks like a very faltering Ethiopian military response.”

The Tigray forces, who had long dominated the national government before Abiy came to power, appear to have the momentum. They’ve approached the capital of Addis Ababa in recent weeks with the aim of strengthening their negotiating position or simply forcing the prime minster to step down…

Back to Top
Close
X
Rwandan mountain gorillas a rare conservation success…AfricaCBS NewsMountain gorilla tourism in Rwanda is helping the country, its people and the animals themselves, reports Lesley Stahl on Sunday's 60 Minutes.…