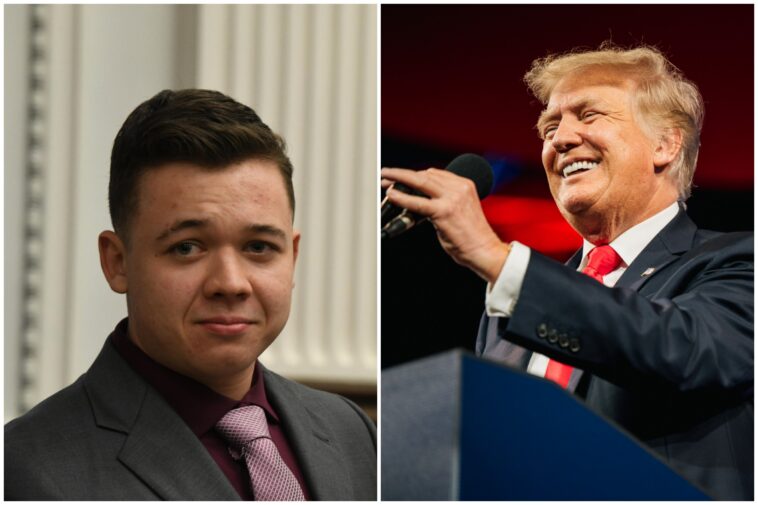 Donald Trump claimed that Rittenhouse has been a victim of prosecutorial misconduct in the trial that concluded last week.

A photo of Kyle Rittenhouse and Donald Trump meeting has been liked on Twitter thousands of times, sparking debate.

During a protest in Kenosha, Wisconsin, in August 2020, Rittenhouse fatally shot two people, Anthony Huber and Joshua Ziminski. Gaige Grosskreutz was also shot by Rittenhouse but only wounded.

Last week Friday, all charges against Rittenhouse were dropped and it was ruled he acted in self-defense.

Former President Donald Trump sent an emailed statement to his followers after the court case ended.

It read: “Congratulations to Kyle Rittenhouse for being found INNOCENT of all charges. It’s called being found NOT GUILTY- and by the way, if that’s not self-defense, nothing is!”

Trump has since met with Rittenhouse at Mar-a-Lago. A photo of the pair has sparked a debate with some praising the president’s support and others questioning whether it is appropriate.

Trump said: “I have to say, Kyle, I got to know him a little bit, he called and wanted to know if he could come over and say hello because he was a fan.

“He came over with his mother and he is really is a nice young man. What he went through, that was prosecutorial misconduct and he should not have had to suffer through a trial for that.

“He is really a good young guy, he is 18 years old and just left Mar-a-Lago a little while ago.

“He should never have been put through that, that was prosecutorial misconduct and it is happening happened all over the United States right now with the Democrats.”

Donald Trump Jr. posted the picture of Rittenhouse and his father to his Twitter page. It has…