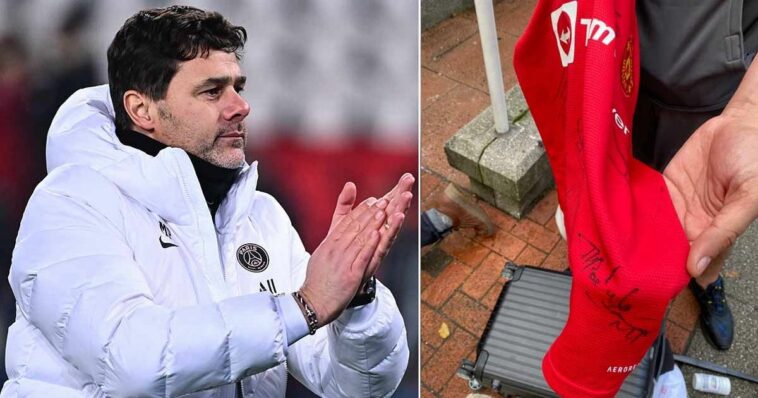 Mauricio Pochettino has given his biggest hint yet over his stance over the Manchester United managerial vacancy after signing the club shirt.

Pochettino is in Manchester ahead of Paris Saint-Germain’s Champions League clash with Manchester City on Wednesday evening, where he granted the United fan’s request for an autograph for his Red Devils shirt.

United are on the lookout for a new boss just days following the sacking of Ole Gunnar Solskjaer.

United have approached PSG regarding Pochettino’s availability but it remains to be seen if it will be possible to prise him away in the middle of the campaign.

If Pochettino should not be available at this time, United are evaluating a contingency plan to appoint an interim boss with talks opened with former Barcelona boss Ernesto Valverde.

Yet former Spurs boss Pochettino remains the priority long-term objective for the Red Devils and his actions in Manchester on Wednesday are the biggest hint yet he is open to a move to Old Trafford.

A United fan approached the PSG boss at the club’s hotel where they were preparing for Wednesday night’s Champions League fixture at the Etihad Stadium against City.

Back to Top
Close
X
Chelsea sweating on scan results as in form star could miss entire season…Champions LeagueCaught OffsideChelsea will be nervously awaiting the results of Ben Chilwell’s scan.Chilwell, 24, was in action during the Blues’ most recent Champion…

X
Jack Grealish's girlfriend Sasha Attwood is a model and influencer…Premier LeagueMirrorJack Grealish has denied rumours of a love triangle between him, his girlfriend and TV star Emily Atack.The Manchester City footballer took to I…