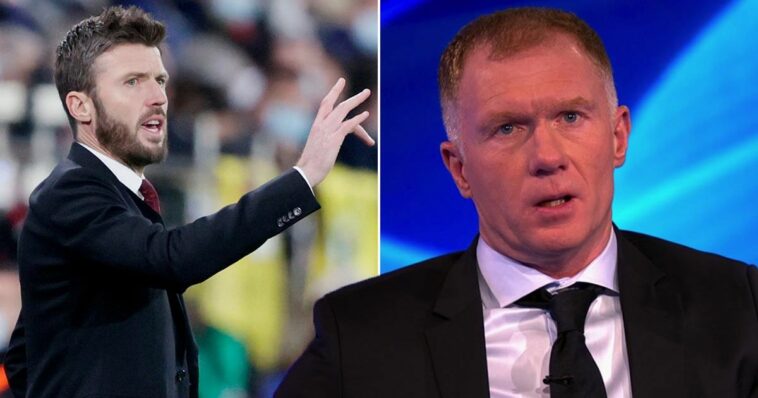 Michael Carrick claims he thought taking on the interim Manchester United role was “the right thing to do” amid criticism from Paul Scholes, who claims he should’ve left his post.

The former United player turned coach has been placed in charge following Ole Gunnar Solskjaer’s sacking at the weekend.

Carrick had formed part of the Norwegian’s supporting cast alongside Kieran McKenna and Mike Phelan.

They were unable to halt the slide under Solskjaer however, with the 4-1 defeat at Watford proving the final straw.

A lack of experience in the United coaching staff was often criticised, but they remained at the helm despite calls for change.

However, with Solskjaer now gone, Scholes believes those who were close to him should’ve also left.

He said on BT Sport : “I feel with Ole he put a lot of trust into Michael, Kieran and Mike Phelan which is why they shouldn’t be at the club now.

“They’re all good friends and they’re good people but if i was them I’d feel guilty still working at the club after Ole put so much trust in them.”

Carrick has no idea how long he will be in charge with the Old Trafford board seemingly undecided in their next move as they weigh up several options.

He has stated his willingness to do the job for as long as is required and felt, after discussions with Ed Woodward, that staying on was for the best.

“I thought that was the right thing to do.”

United had stated they would appoint an interim boss to take over from Carrick before pursuing a major target in the summer.

Ernesto Valverde has been linked with the role until the end of the season. He has been out of work since leaving Barcelona.

Mauricio Pochettino, currently in charge at PSG, is reportedly open to a midseason swap which could see him return to the Premier League.

The Argentine was linked with the Old Trafford job before Solskjaer was appointed back in 2018.

He was quizzed on the possibility over taking over in Manchester but said: “We are not here to speak about that (United interest). I respect my club PSG.

“What another club does is none of my concern…