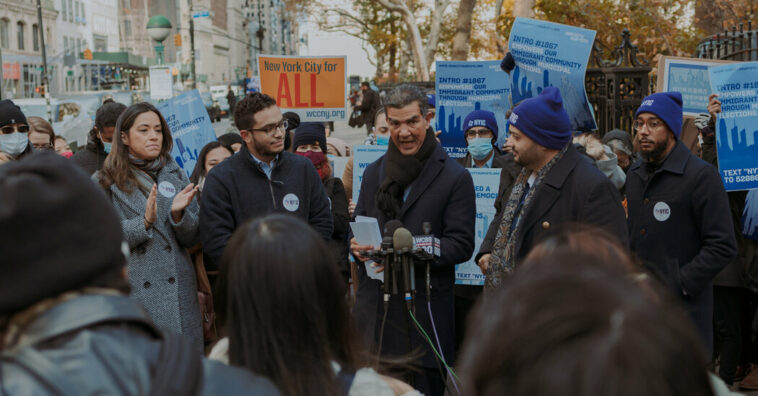 By Jeffery C. May & Annie Correal

NEW YORK — New York City lawmakers are poised to allow more than 800,000 New Yorkers who are green card holders or have the legal right to work in the United States to vote in municipal elections and for local ballot initiatives.

The bill, known as “Our City, Our Vote,” would make New York City the largest municipality in the country to allow noncitizens to vote in local elections.

The legislation, expected to be approved by the City Council on Dec. 9 by a veto-proof margin, comes as the country is dealing with a swath of new laws to impose voter restrictions, as well as the economic and demographic effects of a decline in immigration.

“It’s important for the Democratic Party to look at New York City and see that when voting rights are being attacked, we are expanding voter participation,” said Ydanis Rodriguez, a councilman who sponsored the bill and represents Washington Heights in upper Manhattan.

The legislation, first introduced almost two years ago, is the culmination of more than a decade of work to gain local voting rights for some legal permanent residents. It also extends the right to those with work authorization, such as the “Dreamers,” recipients of a program known as DACA that shields young immigrants brought into the country illegally from deportation and allows them to live and work here.

It was once more common for noncitizens to have voting rights in the United States, but the provisions were repealed around the turn of the 20th century as more immigrants arrived and popular sentiment changed.

Until school boards were disbanded nearly two decades ago, New York City was among the places that allowed noncitizens to vote in school board elections, a right that exists in San Francisco. Several towns in Maryland and Vermont also grant noncitizens some municipal voting rights.

Of the estimated 808,000 adult New Yorkers who are lawful permanent residents, or green card holders, or have work authorization, about 130,000 are from the Dominican Republic; those from China represent another 117,500 people, according to the Mayor’s Office of Immigrant Affairs. Those eligible must be residents of New York City for 30 days and otherwise eligible to vote under state law.

Back to Top
Close
X
Victims of Walmart ‘Peeping Tom’ waited for him outside the restroom, Georgia cops say…NewswireBellingham HeraldA group of men took matters into their own hands after coming to the conclusion someone was photographing them in stalls at a Walmart…

X
The Polar Silk Road will be cleared with Chinese icebreakers…NewswireBrookingsThe United States is an Arctic nation. With that status it enjoys unique access to the resources of this rich region — its abundant fisheries…