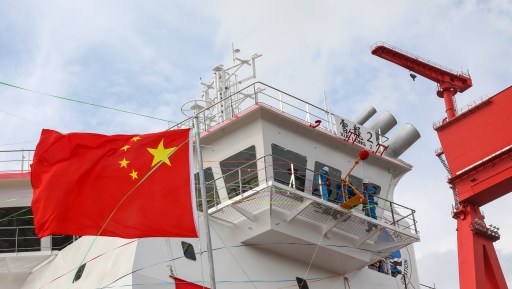 The United States is an Arctic nation. With that status it enjoys unique access to the resources of this rich region — its abundant fisheries, critical minerals, energy resources, and future shipping routes. Most importantly, it has a primary say in the governance of the Arctic. Commandant of the U.S. Coast Guard Admiral Karl Schultz is among those who commonly say that “presence equals influence in the Arctic.” Yet, the United States has only one heavy icebreaker: the incredibly aging Coast Guard Cutter (CGC) Polar Star, and the medium icebreaker, CGC Healy, used primarily for marine science research. Neither is in a position to be utilized for year-round Arctic icebreaking operations. The Polar Star is consumed by the annual icebreaking mission to Antarctica for which there is no other government vessel capable, and the Healy, as a medium icebreaker, is not well suited for winter Arctic operations.

Meanwhile, China’s Ministry of Transport has announced that it will develop a new heavy icebreaker and a new heavy-lift semi-submersible vessel capable of salvaging and rescuing vessels in the Arctic. This would supplement their two existing icebreakers and be in addition to reports of their development of a nuclear-powered icebreaker. With these investments, the Chinese have signaled a commitment to Arctic infrastructure and the importance of safe navigation for their economic lifeline — global shipping — in a way that the United States has failed to do.

This is not to say that other types of presence in the Arctic are not important. The U.S. Navy and Air Force deserve deep appreciation for the role of submarines and strategic aircraft in maintaining U.S. and allied superiority in the region. The need for a visible surface icebreaking presence, however, is unique and essential to the geopolitics of this new era in strategic competition and even more essential to expanding economic growth in the Arctic…

The Polar Silk Road will be cleared with Chinese icebreakers