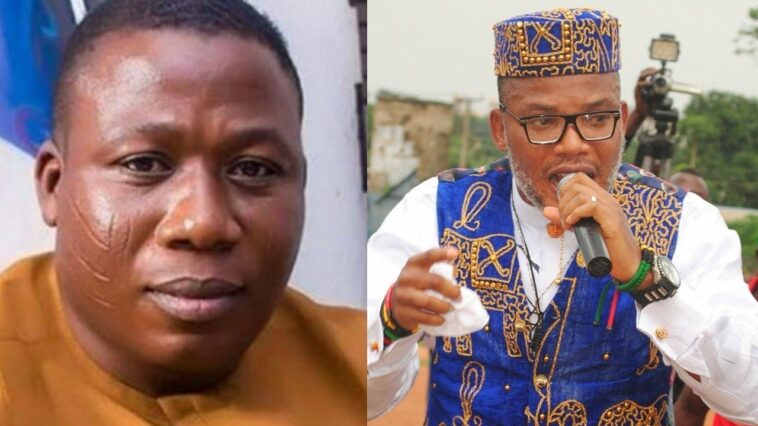 Some civil society groups have reacted to media reports credited to a coalition of NGOs questioning the efficiency of the intelligence gathering architecture in Nigeria.

The groups, Citizens Action for Better Nigeria, Arewa Youth Federation and Concerned Citizens of North-East Region, in a statement issued to newsmen in Abuja and signed by their leaders, Smart Edward, Adamu Matazu and Mallam Idris Muhammad, respectively wondered why anybody would cast aspersions on the capacity and professionalism of Nigeria’s intelligence architecture.

According to the groups, the arrest of Nnamdi Kanu, leader of the proscribed Indigenous People of Biafra (IPOB) and Sunday Ighoho, Yoruba agitator, is evidence of effective intelligence by the Department of State Security (DSS) and Defence Intelligence Agency (DIA).

“We are dismayed to note that certain unscrupulous elements whose stock in trade is peddling falsehood could question the role of the Department of State Security (DSS) and Defence Intelligence Agency (DIA).

“These are top-performing agencies that are at par with their sister agencies like the FBI, CIA and KGB. To say they’re not performing is treasonable,” the statement added.

Recalling the outstanding outings of both DSS and DIA in arresting the duo of Nnamdi Kanu, leader of the proscribed Indigenous People of Biafra (IPOB) and Sunday Ighoho, Yoruba agitator, the group is amazed that any well-meaning Nigerian will underplay these giant strides and seek rather blackmail officers and men who put their lives on the line for the service of their fatherland.

It said, “We make bold to say that the arrest of Nnamdi Kanu of IPOB and Sunday Ighoho of Oduduwa Republic as well as other top arrest and clamp down on errant citizens bent on destabilizing the country is nothing but the pure work of professionals who infiltrate enemy lines to gather information as to its never done elsewhere.

“Nigerians haven’t forgotten the fact that the Southeastern part of Nigeria was a flashpoint of criminal activities. The Anambra election almost did not hold until the military and DSS stepped in, flushing the bad eggs and making the southeast safe. This is a job well done and worthy of commendation instead of criticisms.

“If intelligence gathering is enough, America would not have experienced the tragedy of…