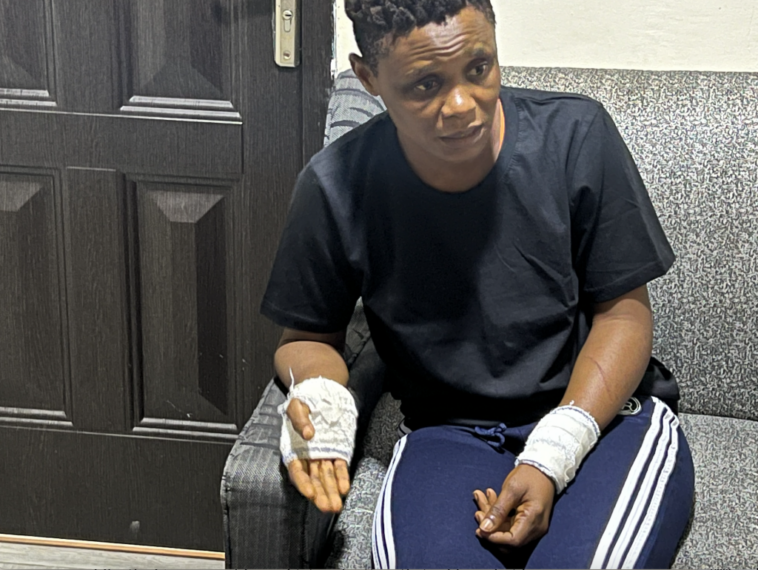 Since the Nigerian Army sprayed bullets at young persons protesting against police brutality and bad governance at the Lekki Tollgate in Lagos, Kamsi Ibeh and many others have been seeking justice for the victims.

The October 20 incident had unravelled before Ibeh’s eyes and she had attended the Lagos State Judicial Panel on Restitution for Victims of SARS Related Abuses and Other Matters, to give testimonies.

The panel would later submit a 309-page report to Babajide Sanwo-Olu, the Governor of Lagos State, admitting that soldiers shot live ammunition at the armless protesters with the intention to kill them.

While returning home on Sunday November 21, Ibeh was stabbed multiple times by unknown armed men who identified her as one of those who appeared before the panel, and vowed to send her to heaven to seek justice.

The #EndSARS protester shared her horrible experience in an interview with FIJ.

What happened on Sunday night

On my way, I saw three guys walking ahead of me. I didn’t know they had any motive. People were going with them and I was on my lane. I  would walk a while and stop to flag down any vehicle going my way.

And that particular axis at that time, if you know the place very well, it is always quiet even in the daytime. So, while I walking, these three guys came. One of them flashed a light on my face, the other one turned to this side. I was still scared trying to understand if they wanted to rob me. I didn’t have any money. What I had was just my phone and transport fare.

One said, “Na she be dis na.” So they started beating me. When they were beating me, they were saying: “shebi una dey agitate for justice. If we kill you, you go see the justice.”

I instantly denied it, pretending not to know what was going on. I told them I didn’t know what they were talking about. I said I was am not the person.

What they attacked her with

The more I talked, the more they would beat me. They were hitting planks all over my body, punching me. They brought out a cutlass, tearing my body like they were cutting meat. So, I was screaming for help. In the process when I was screaming for help, two guys from afar (I guessed they helped me because they noticed what was going on) were running in that direction. I was screaming “my hand, my blood”. So those guys rushed in and the guys ran away.

INTERVIEW: How I was stabbed multiple times for seeking justice — #EndSARS Protester

X
Financial tips after buying your first homeMore RifsInvestopedia How do you protect your investment in your first home? Despite the relief of finally being there after all the work of finding and buying…