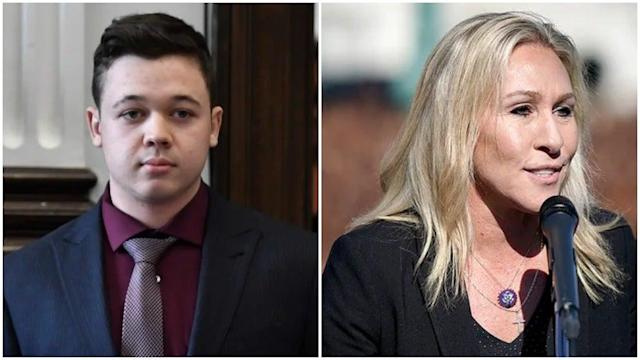 The Congressional Gold Medal is the highest honor Congress can award an individual or institution. It is highly unlikely the bill will go anywhere in the Democratic-controlled House and Senate, and it has no co-sponsors.

Rittenhouse, who fatally shot two protesters in Kenosha and wounded a third, was acquitted last week by a jury of all charges, including intentional homicide.

“Kyle Rittenhouse deserves to be remembered as a hero who defended his community, protected businesses, and acted lawfully in the face of lawlessness. I’m proud to file this legislation to award Kyle Rittenhouse a Congressional Gold Medal,” Greene said in a statement to The Hill.

Conservatives have praised the jury’s not guilty verdict in a trial that has divided the nation along partisan lines, embracing the argument that Rittenhouse was acting in self-defense and intended to protect local businesses.

A spokesperson for Rep. Matt Gaetz (R-Fla.), who has offered Rittenhouse an internship with his office, told The Washington Post in response to Greene’s bill, “We are concerned that awarding Kyle with a Congressional Gold Medal will give him a big head during the internship with our office.”

Rep. Madison Cawthorn (R-N.C.) also offered Rittenhouse an internship following the verdict. And former President Trump said on Tuesday that Rittenhouse visited him at his resort in Florida shortly after being found not guilty.

The reaction has been different among Democrats, many of whom have expressed shock that Rittenhouse, who was 17 at the time of the shootings, could…