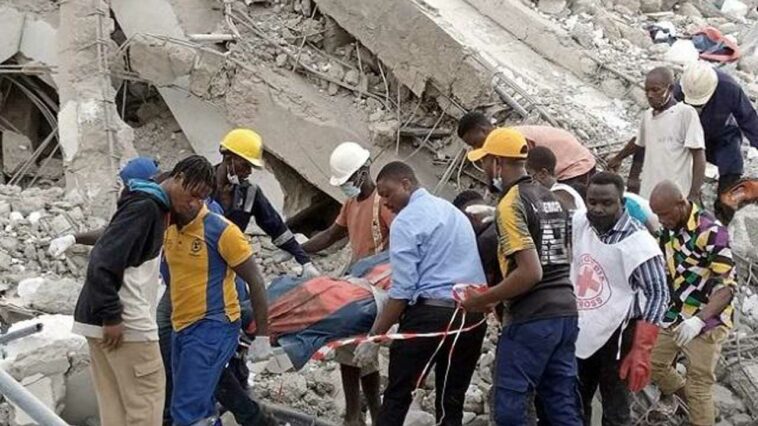 The official death toll in the Ikoyi building disaster early this month has been put at 45, a numbing figure no matter how we look at the incident.  It is easy to see the trauma with which some of the 15 persons rescued must be grappling. Many of them must still be dazed. On awakening there will be gnashing of teeth, there will be biting of lips: Had I known; there will be tales to narrate. As I said last week, for a long time to come, the collapse of the 21-storey building at Gerrard Road, Ikoyi, will be subject of public as well as private, hush-tone discourse in the closet. For some of the survivors, the experience must have been one in a dreamland. There are several dimensions to it. There is the structural integrity of the building; the quality of materials, failure of soil engineering tests if a foundation meant to carry a five-storey building was later to have erected on it a high-rise of 21 floors. The Nigerian Institution of Structural Engineers is looking into that aspect of the disaster. Indeed, the Institution has issued a four-page report it calls a summary of its preliminary findings. The engineers already expressed misgivings about the structural integrity of the building.

However, what can’t but agitate the minds of a great many is how come that more than 60 persons gathered on that day, and 45 of them made up of people of different backgrounds and social classes, died. They were buried under the rubble; 15 were rescued. Several others came out of their own, injured in varying degrees. Among the dead was the friend of Femi Osibona, the developer, who was to travel later that day to the United States where he lived. Wale Bob-Oseni joyfully honoured the invitation of his friend to visit the edifice he was raising at Ikoyi. He diverted his journey to rejoice with his bosom friend. He died along with Mr. Osibona when the building, without warning, came down. How come that it was on that day, at that hour of his visit that the building collapsed and they were buried under the rubble? How come many died and 15 were brought out alive? They are survivors living to tell the story today and for many more years to come, and learn from the harrowing, indeed traumatic experiences. Had their miraculous escape from the jaw of death to do with good luck and the dead, with pitiful ill-luck? What was the thread that connected them regardless of their social standing and got them gathered for the ill-fated day? This reminds one of the air disasters in Canary Islands in the Atlantic off the coast of southern Morocco many years ago in which 550 of the 643 people aboard two aircraft were killed. The aircraft collided and burst into flames at take-off in what is the worst disaster in aviation history till date. Why should such a huge number of people share the same fate at the same time, what nearly every one of us would describe as unimaginably cruel fate?

We must begin by recognising that there is unceasing weaving and surging all around us, with each human being supplying the threads in the tapestry of life. With the understanding and contemplation of invisible activities in which the human being is central, it will not be hard to see that there are no accidents in life. A person who could have been spared from being a victim of the tragedy for example could have been insufficiently alert, negligent or careless to pick warnings to steer clear of the site at that time or on that day. It was possible the wife’s feeling of uneasiness about her man going out at that time was brushed aside by one of the victims as men are wont to do.

To unravel the situation in which many people are killed at the same time in a disaster, we can look at the practice of cooperative farming. Those involved have the same aim; they sow together, the fruits ripen at the same time, then the harvest. This is followed by sharing of profits or losses. This can…

Back to Top
Close
X
Kidnappings: The new normal killing NigeriansOpinionThe GuardianBy Mukhtar Garba KobiSir: Life cannot be meaningful and peaceful if people are living under threats and uncertain of their safety. Defence…

The riddle of deaths in Ikoyi building collapse