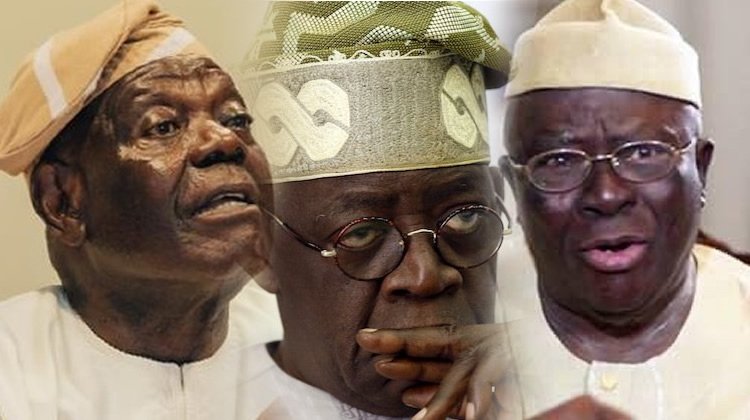 The National Leader of the All Progressives Congress, Bola Tinubu, has chosen silence as the leader of pan-Yoruba socio-political group, Afenifere, Ayo Adebanjo; and former Interim APC National Chairman, Bisi Akande trade words over the sponsorship of Abebanjo’s Lekki house.

Akande in his 559-page autobiography titled ‘My Participations’, launched in Lagos on December 9, 2021, had claimed that the 93-year-old Afenifere leader pestered Tinubu to build him (Adebanjo) a house in Lekki, where he now resides.

Akande on Page 415 alleged, “One day, Sir Olaniwun (Ajayi) was launching a book at Muson Centre, Lagos. After the book presentation, Tinubu said I should not go and that he would like to see me. We met in a small room where he also invited Sir Olaniwun Ajayi. ‘Papa, you can see that this document is old, Tinubu said as he handed over a big envelope to Ajayi. This is your C of O (Certificate of Occupancy)!’

“Tinubu told me later that after he presented Adebanjo’s C of O to him, Adebanjo was always pestering Tinubu until he helped built a house on the plot. The street was also named in honour of Adebanjo and he is living in that house now at Lekki Phase One.”