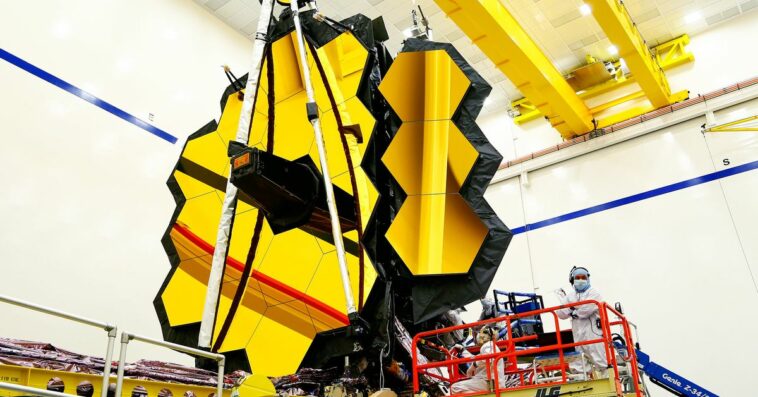 The James Webb Telescope (JWST) has finished unfolding its primary mirror, ending a series of major deployments that took place over the span of two weeks. All of those deployments needed to go perfectly in order for the massive space telescope, which was decades in the making, to function.

The JWST has two primary mirror panels on either side that it will use to collect infrared light from the distant Universe. Each of them consists of three gold-plated hexagonal mirrors. Today, the rightmost wing was successfully unfurled, just one day after the leftmost wing was deployed. Now that both sides have been locked into place, this completes the array of 18 mirrors that makes up the 21-foot-wide JWST.

The JWST launched into space on Christmas Day, and since the full-size mirror was too large to fit on a rocket, scientists designed it in a way that allows its components to fold, something that has never been done before. Once the JWST reached space, it began the precarious unfolding process. Earlier this week, the spacecraft…

Back to Top
Close
X
Snoop Dogg fan pays $450,000 to be his next-door neighbor in the metaverse…TechnologyBy Daniel Levi The era of the Internet is upon us and the metaverse is here to change the internet as we know it. Unless you’ve been living in a cave,…

X
Metaverse startup RTFKT sells 620 pairs of virtual sneakers for $3.1 million in …TechnologyBy Daniel Levi Would you buy shoes or houses that don’t exist? If yes, how much would you be willing to pay? Now imagine if you have to sell these pro…