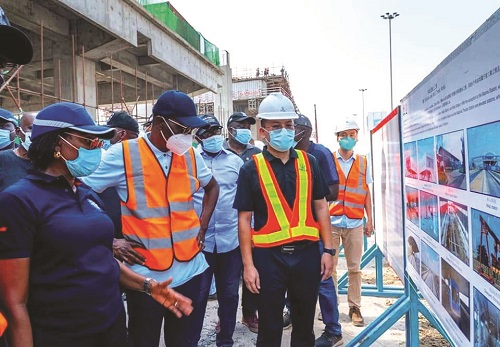 Lagos State Government is determined to deliver on the blue and red light trains and begin the Fourth Mainland Bridge and coastal roads, writes ADEYINKA ADERIBIGBE

The Blue and the Red light train are two of the six train systems under the Lagos Train Mass Transit (LRMT) a major plank of the Strategic Transportation Masterplan (STMP) meant to redefine public sector transportation in Africa’s leading megacity and fourth biggest economy.

Under the Lagos Urban Rail Network (LURN), six such lines are mapped. While two, which have since become the flagship are nearing completion, the remaining four – the Green, Orange, Purple and Yellow lines, as well as a mono rail that would ply Obalende-Victoria Island-Ikoyi, are at various stages of bidding process.

The Lagos State Governor Babajide Sanwo-Olu who toured the ongoing railway projects on January 3, 2022 was happy that the projects are on course and would be delivered on target.

He said: “Our promise on the blue and the red line is still on course. We believe that, by coming on a quarterly basis to supervise them, we would ensure that before the end of this year, we will see the trains on top of the tracks.”

The governor said the two are “iconic and landmark projects”, for which the Lagosians would be proud.

He saluted the commitment of the contractors for their commitment.

He said he would intensify quarterly inspection to facilitate speedy completion, even as he praised the contractors for keeping to timelines. “We embarked on this similar tour about three or four months ago. I am happy to report that the construction is going on according to schedule,” the governor told journalists who were with him during the tour to the four stations.

The governor said there were significant improvements in construction works at…

X
Greece donates one million J&J vaccines to Nigeria…Latest News  The Guardian Greece has donated about one million doses of the Johnson and Johnson (J&J) COVID-19 vaccine to Nigeria, as the Federal Govern…