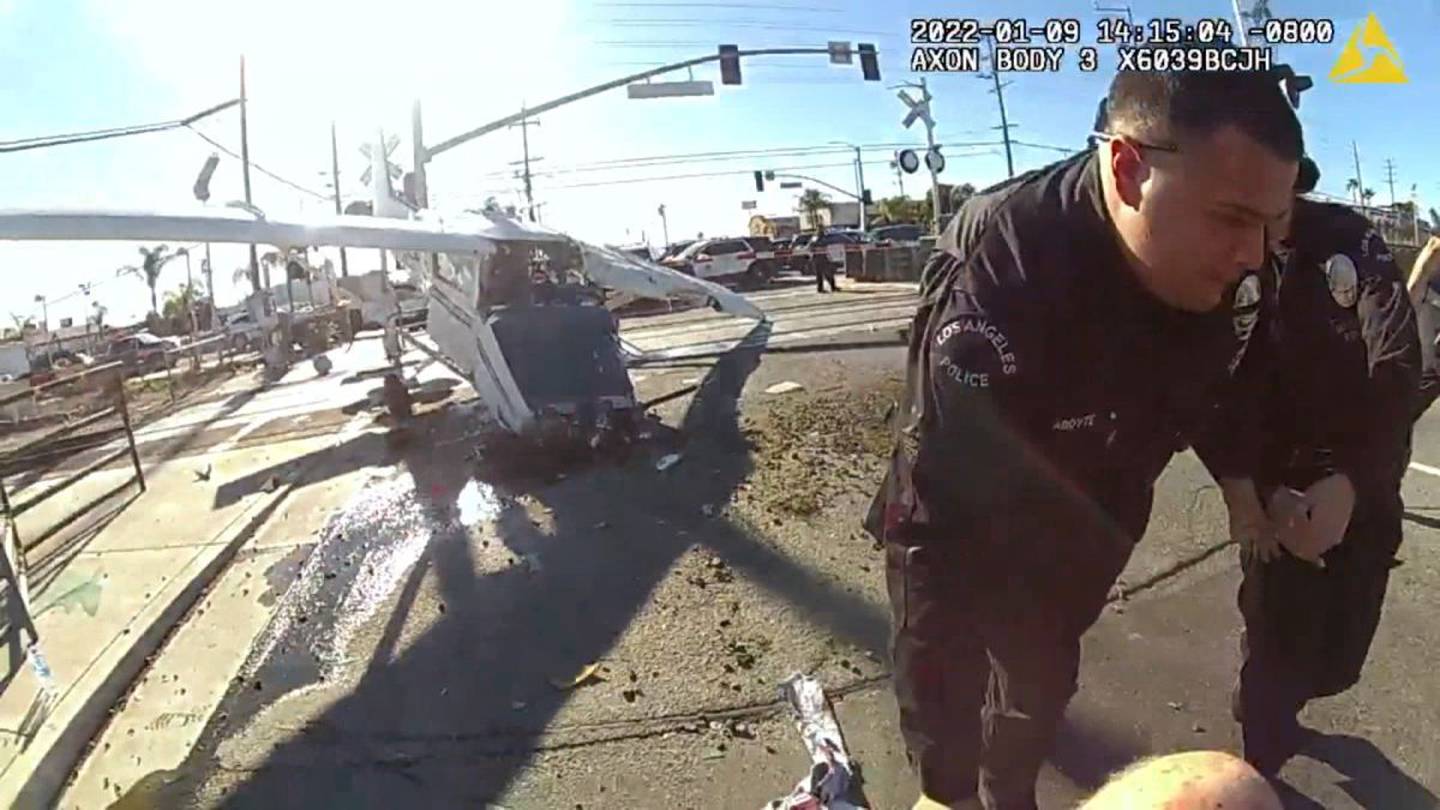 Train smashes through downed plane SECONDS after pilot is rescued

The pilot of a small plane averted death twice in a span of minutes on Sunday, first when he crash-landed onto railroad tracks, then when Los Angeles police rescued him just before a commuter train smashed into the aircraft.

Bodycam video showed the officers working furiously to disentangle the bloodied pilot from the cockpit of the crumpled Cessna 172.

“Go! Go! Go! Go! Go!” someone yelled as the officers dragged the man away seconds before the Metrolink train, its horn blaring, barreled through the plane.

The single-engine plane had engine failure during takeoff from Whiteman Airport in the San Fernando Valley community of Pacoima and went down moments later, police Capt. Christopher Zine told reporters.

The plane ended up on a rail crossing in an intersection adjacent to the airport and just blocks from the Los Angeles Police Department’s Foothill Division station. Officers arrived at the crash scene almost immediately.

Officer Christopher Aboyte told KABC-TV that he initially stood by the plane trying to keep the pilot, who was seated, conscious and alert.

“We looked and sure enough there was a train headed right for us at full speed,” he said.

“When things like that happen you kind of just go and do it,” Castro said. “You don’t really have much time to think.”

The bodycam captured the sight and sound of the train blasting through where the pilot had been seconds earlier.

“I think this guy needs to buy a lottery ticket ’cause he pretty much cheated death twice within 10 minutes,” Sherock told KNBC.

The pilot was the only person on board. He was taken to a hospital.

He was identified as 70-year-old Mark Jenkins by a relative, Dan Mortensen, who told KNBC-TV that the pilot suffered “pretty significant” damage to his face including broken bones and also had broken ribs.

Mortensen said Jenkins probably intended to land on the tracks to avoid possibly hitting people on the ground.

“He didn’t anticipate a train coming through at 80 mph,” Mortensen said.

Metrolink service was halted and road traffic was detoured in the area about 20 miles (32 kilometers) northwest of downtown Los Angeles. The FAA and the National Transportation Safety Board will investigate.

Back to Top
Close
X
Fauci's NIH division paid $205K for Researchers to study Transgender Monkeys…Last PostFreebeaconDr. Anthony Fauci's division of the National Institutes of Health paid over $200,000 during the coronavirus pandemic for researchers to stud…