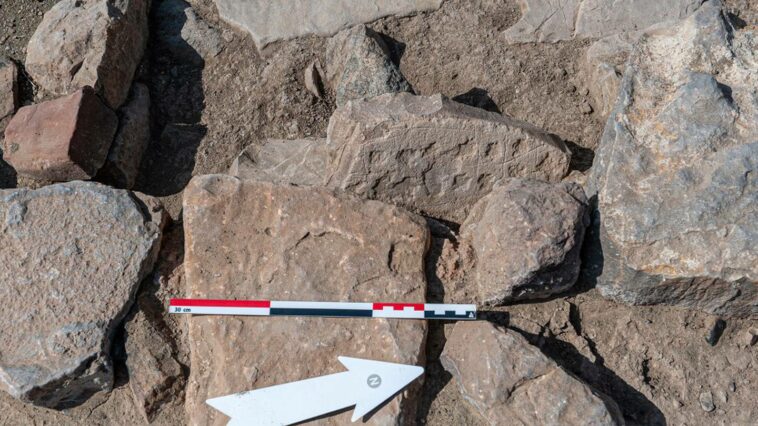 A 4,000-year-old stone board game has been discovered by archaeologists in Oman.

The large board – which had marked fields and cup holes – was found by a team from the Polish Centre of Mediterranean Archaeology and Oman’s Heritage and Tourism Ministry near the village of Ayn Bani Saidah.

The Omani-Polish archaeology team was led jointly by Prof Piotr Bielinski of the centre at the University of Warsaw and Dr Sultan Al Bakri, director general of antiquities at Oman’s Ministry of Heritage and Tourism.

After finding a tower in a Bronze Age settlement during archaeological fieldwork in Qumayrah Valley in northern Oman, archaeologists unearthed evidence of copper smelting.

That is when they discovered the stone board game.

Board games were played during the Bronze Age at economic and cultural centres, the researchers said.

“Such finds are rare, but examples are known from an area stretching from India, through Mesopotamia even to the Eastern Mediterranean,” Prof Bielinski said.

“The most famous example of a game board based on a similar principle is the one from the graves from Ur,” said the archaeologist, referring to the Royal Cemetery at Ur, an archaeological site in Iraq.

Pots, jewellery and bones were found in the tombs

The team made the discovery while investigating the development of settlements in one of the least-studied corners of Oman – the mountain valleys of the northern Hajar range.

Its most recent focus was on settlements from the Umm An Nar phase of the Bronze Age and Iron Age II situated near the village of Ayn Bani Saidah.

“Along this route, there are some major sites from the Umm An Nar period,” said Prof Bielinski. “So we hoped that our site would be in the same league.”

Towers’ function is not yet known

The settlement is exceptional for including at least four towers: three round ones and an angular tower.

One of the round towers had not been visible on the surface despite being 20 metres in diameter and was discovered only during excavations, said Dr Agnieszka Pienkowska of the PCMA.

She said the function of the…

Back to Top
Close
X
There are two kinds of Metaverse. Only one will inherit the Earth…ScienceThe Virtual Metaverse will be for gaming and other short duration uses, while the Augmented Metaverse will revolutionize society. By Louis Rosenberg ✔…