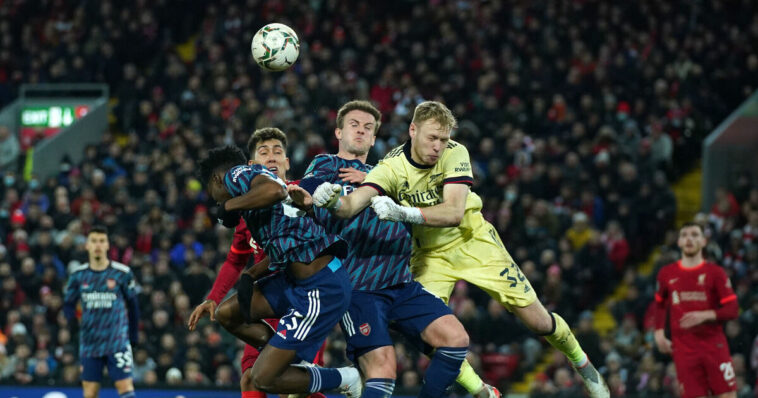 Ever since the Wenger days, Arsenal have loved a red card, but rarely have they produced a performance as gritty, organised, and full of character as this goalless draw at Anfield with only 10 men.

Jürgen Klopp’s Liverpool have scored 43 goals against Arsenal sides since he took over on Merseyside — more than against any other club — and yet they didn’t manage a single shot on target against Mikel Arteta’s depleted side in this Carabao Cup semi-final first leg. That says an awful lot about the display and attitude of the visitors.

Of course, you could say that Arsenal have had more practice with 10 men than any other team in the Premier League (they are the only club to have reached 100 dismissals since the league’s formation) but even so, this was a highly positive night for the Gunners, against all odds, and leaves them still dreaming of reaching the final at Wembley.

Xhaka’s dismissal this time, for a crazy waist-high challenge on Diego Jota, was the 12th red card since Arteta took command and also the fifth of the Swiss midfielder’s career, so it came as no shock to anyone who knows their Arsenal history.

Arsene Wenger’s legendary side, which featured greats such as Tony Adams and Patrick Vieira, suffered 23 red cards in his first three seasons in charge and continued to bother referees for the rest of his time in north London.

Maybe we should stop worrying about Arsenal’s poor discipline, because you have to say Arteta’s team responded brilliantly and heroically at Anfield, with a focused and organised performance that frustrated Liverpool and irritated the home crowd — exactly what you want to do when you are playing in front of the Kop.

Back to Top
Close
X
Former NBA star Shawn Bradley, paralyzed in accident, makes emotional admission…SportsFox NewsShawn Bradley, the No. 2 overall pick of the 1993 NBA Draft who was paralyzed last January in a bicycle incident, admitted to having suicidal …

X
Liverpool held by Arsenal in Carabao Cup first leg at Anfield…SportsIrish TimesMikel Arteta needed a show of character from Arsenal at a ground where they have displayed little in recent years. He appeared to require a…