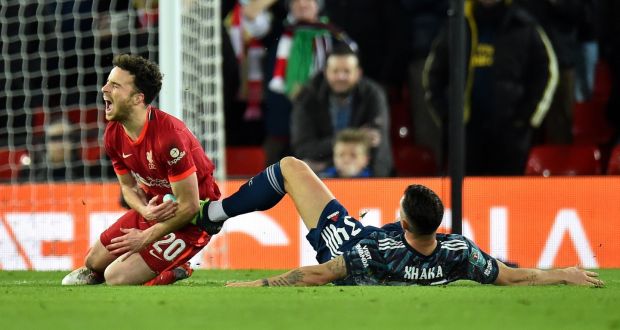 Mikel Arteta needed a show of character from Arsenal at a ground where they have displayed little in recent years. He appeared to require a miracle too when Granit Xhaka’s latest red card gave Liverpool 66 minutes plus five minutes of stoppage time to seize control of the Carabao Cup semi-final. He received both, and more, as Arsenal produced a tireless display to stifle Jürgen Klopp’s team at Anfield.

There is a long way to go in this semi-final but the reaction to the final whistle demonstrated where the advantage lies, and who departed the first leg with greater belief. Arsenal’s exhausted players exchanged high-fives while their fans celebrated a goalless draw in the Anfield Road stand. Liverpool lacked inspiration and penetration throughout, and must rediscover both to progress to a final meeting with Chelsea on February 27th.

The two managers selected arguably their strongest available teams, although the squad available to Klopp was undoubtedly stronger than the one at Arteta’s disposal as Covid, injuries and the Africa Cup of Nations had a greater impact on Arsenal’s depth.

Trent Alexander-Arnold’s first appearance in the competition for five years underlined the seriousness of the Liverpool manager’s approach to the semi-final. A hip injury suffered in the first minute by Cédric Soares, who was deputising at right back for the injured Takehiro Tomiyasu and forced off 10 minutes later, reflected the Arsenal manager’s misfortune. But it would not end there.

Arsenal made a vibrant start and were committed to attacking in numbers when an opportunity arose on the counter-attack. That policy had to be abandoned, however, when Xhaka was shown a straight red card for denying Diogo Jota a clear goalscoring opportunity, while volleying him in the ribs for good measure.

The pattern of the tie turned in an instant. One moment Arsenal were on the front foot with Bukayo Saka breaking down the right and crossing low towards Eddie Nketiah, who failed to connect at full stretch, plus Alexandre Lacazette, who was also unable to apply a finishing touch. The next, they were carved open at the back by Andy Robertson’s long diagonal ball towards Jota. The Portugal international was ghosting in on Xhaka’s blindside and set to go clean through on Aaron Ramsdale’s goal when the Arsenal midfielder made an honest, if desperate, attempt to hook clear.

He connected with the Liverpool forward’s chest instead and the referee, Michael Oliver, immediately brandished the fifth red card of Xhaka’s Arsenal career.

As the Switzerland international sloped off, after arguing his lost cause with Oliver for a lengthy period, Arteta consulted with his backroom staff over their emergency measures. The result was Rob Holding for the unfortunate Nketiah and a switch to a five-man defence.

That understandable move left the visitors with a fragile-looking midfield three of Saka, Albert Sambi Lokonga and Gabriel Martinelli, but the trio dug in to help frustrate Liverpool for the remainder of the first half.

Back to Top
Close
X
Depleted Arsenal pass massive character test at Anfield…Sportsirish ExaminerEver since the Wenger days, Arsenal have loved a red card, but rarely have they produced a performance as gritty, organised, and full of…