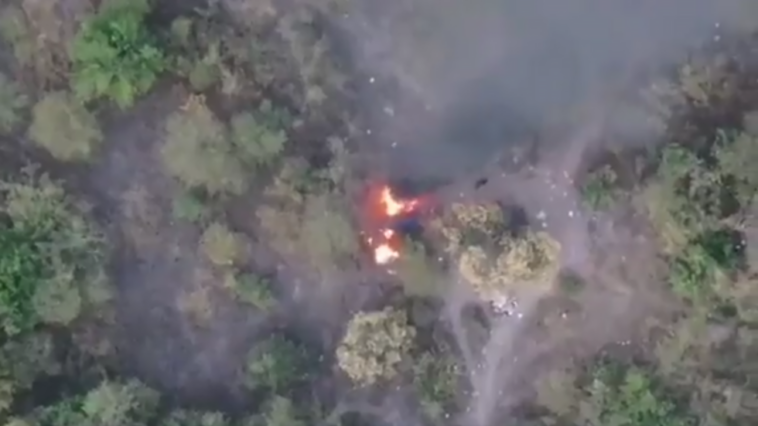 Several Mexican outlets have released shocking footage that features an alleged cartel-operated drone dropping bombs on Monday on what is said to have been a rival camp.

A video that appears to have been shot from the same unmanned aerial vehicle that was dropping explosives captures a large tent below, moments before it was hit by a bomb. Seconds later, half a dozen inhabitants are seen fleeing for their lives, with the drone raining down more explosives. Some 26 seconds into a second clip, the camera attached to the drone begins violently spinning, leading some to conclude it might have been shot at from the ground.

In the second half of the video, the drone crashes, possibly after being shot down pic.twitter.com/I4gF7zcII4

According to the Mexican edition of the Spanish newspaper El Pais, the unmanned aerial vehicle had been operated by the Jalisco New Generation Cartel (CJNG) and the tent belonged to a rival camp in the state of Michoacan. Other outlets claim the powerful criminal group had targeted local townspeople who had dared to try to prevent the cartel seizing territory. At least one person reportedly sustained injuries as a result of the bombing, and the attack caught on camera was just one in a series of similar drone raids in the area.

In December, the US Drug Enforcement Administration described the CJNG as “one of Mexico’s most violent and prolific drug trafficking organizations, which has been flooding the United States with fentanyl and methamphetamine.” It said that “disrupting and destroying this organization” was one of its “highest priorities,” and offered a $10,000,000 reward for information that led to the capture of the cartel’s boss, Nemesio ‘El Mencho’ Oseguera Cervantes.

The state of Michoacan has been at the…