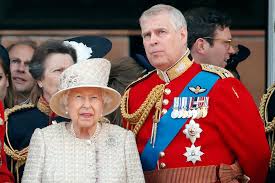 Prince Andrew was stripped of his military and royal titles Thursday — a day after a Manhattan judge allowed the sexual-assault lawsuit against the disgraced royal to move forward.

“With The Queen’s approval and agreement, The Duke of York’s military affiliations and Royal patronages have been returned to The Queen,” Buckingham Palace said of the 61-year-old prince.

A royal source confirmed that Andrew would no longer use the title “His Royal Highness” in any official capacity and his other roles would be distributed among other members of the royal family.

“The Duke of York will continue not to undertake any public duties and is defending this case as a private citizen,” the palace said…

Back to Top
Close
X
Russia raises stakes over Ukraine, won't rule out military deployment to Cuba and Venezuela…NewswireStuffRussia on Thursday (early Friday, NZT) sharply raised the stakes in its dispute with the West over Ukraine, with a top diplomat refusing to rule …

X
Grade 10 pupil allegedly guns down classmate at Gauteng school before shooting h…NewswireNews 24A Grade 10 pupil has shot and killed another pupil before taking his own life, Gauteng officials said on Thursday.  The shooting took plac…