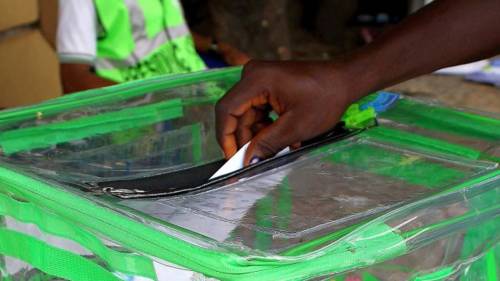 The Southern and Middle Belt Leaders’ Forum has called on political parties in Nigeria to give their presidential tickets to politicians from the South to produce the next President that will succeed President Muhammadu Buhari in 2023.

The leaders under the aegis of SMBLF said any political party which fails to do so will not have the support of the people of the Southern and Middle Belt of the country.

According to SMBLF, the structure and constitution of Nigeria is grossly deficient, which calls for restructuring and birth of a new constitution.

These were contained in a communique issued by the SMBLF after a meeting on Thursday in Abuja, under the Chairmanship of the Leader and Elder Statesman, Chief Edwin Clark.

Part of the communique reads, “The meeting extensively discussed various issues on the State of Affairs in the country, particularly, the security situation, Restructuring, preparations for the 2023 General Elections and Zoning.

“Arising therefrom, the meeting resolved as follows: That the extant Constitution and Structure of Nigeria are grossly flawed and lopsided, accordingly, Forum restates its demand for the fundamental restructuring of the country by enacting a new Constitution that would enthrone equity, fairness and justice. It must be One Nation, One System;

“Cites that the northern part of the country would have fully enjoyed the Office of the Presidency of the country for the full statutory period of 8 years by 2023, hence, the presidency should rotate to…

X
Flood Twitter with Buhari's achievements, APC urges supporters…Political LandscapePunchFollowing the lifting of the Twitter ban by the Buhari regime on the midnight of January 13, 2022, the All Progressives Congress has urged its su…