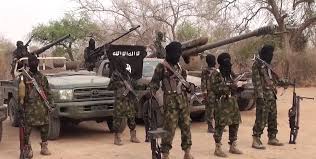 Members of the deadly Boko Haram terrorist sect, on Thursday, invaded the police mobile training school in the Limankara Gwoza local government area of Borno State abducting many people in the process.

According to Punch, the kidnappers left with an unspecified number of mobile policemen.

The training school is located twenty-five kilometres from Gwoza town, the hometown of Senator Ali Ndume, the Chairman Senate Committee on Army. It is a border town between Borno and Madagali LGA of Adamawa State.

The insurgent fighters reportedly attacked the training school on Thursday night with gun trucks and shot sporadically into the air before kidnapping the mobile police instructors.

The attack is coming seven days after the terrorists attempted to infiltrate the Nigerian Army base in Gwoza in which they were successfully repelled by men of the Nigerian army.

Back to Top
Close
X
Why Nigeria has leaders seeking 19th-century cattle grazing routes — Osundare…Latest NewsBy Gbenga AdenijiPoet laureate, Prof Niyi Osundare, has said the more college degrees Nigerians acquire; the farther they tend to be from rational, in…