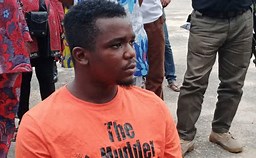 An Akwa Ibom State High Court sitting in Uyo has adjourned the trial of Frank Akpan and his daughter, Bassey Anwan, over the alleged murder of a job seeker, Iniubong Umoren.

The persons are standing trial on two-count of accessory after the fact of murder and harbouring of the first accused person, Akpan, in order to escape punishment respectively.

The court adjourned the trial to January 31 following the withdrawal of the lead Counsel, Emms Ekongson.

According to Vanguard, Ekongson notified the court of the termination of their representation of both of his clients on Friday in a letter addressed to the Clerk of the Court.

In the letter which was read before the court by the clerk, Ekongson noted that the decision to terminate their representation followed the failure of the family of his clients to pay his fees.

During the court proceeding, counsel to Uduak-Abasi Akpan, the first accused person, and Coordinator, Akwa Ibom State Legal Aid Council, Samson Adula, assured the court he would contact another lawyer to represent the two accused persons.