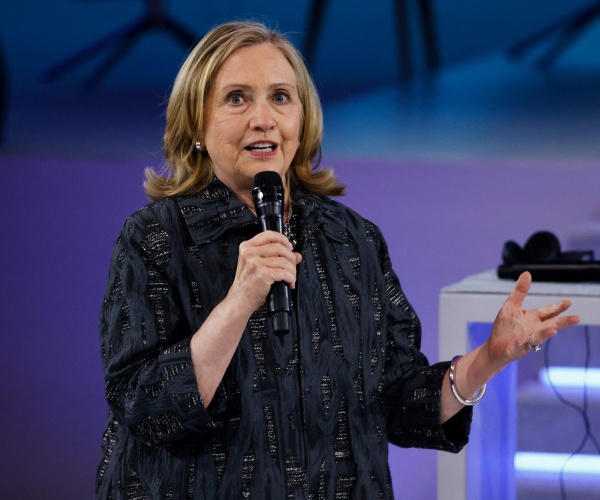 Former US Secretary of State Hillary Clinton delivers a speech during the opening session of the Generation Equality Forum, a global gathering for gender equality convened by UN Women and co-hosted by the governments of Mexico and France in partnership with youth and civil society, in Paris on June 30, 2021. - The Forum kicked off in Mexico City in March and ends in Paris from June 30 to July 2, 2021, launching a series of actions for gender equality. (Photo by Ludovic MARIN / AFP) (Photo by LUDOVIC MARIN/AFP via Getty Images)

Clinton, the 2016 Democrat nominee who lost to Donald Trump, took to Twitter to blast Sens. Joe Manchin, D-W.Va., and Kyrsten Sinema, D-Ariz., for their opposition to ending the filibuster and thus obliterating any chance of passing voting rights legislation.

“MLK Jr. said: ‘I had hoped that the white moderate would understand that law and order exist for the purpose of establishing justice, and that when they fail in this purpose they become the dangerously structured dams that block the flow of social progress.’ This is a subtweet,” Clinton tweeted Friday.

With President Joe Biden’s approval numbers in free fall, Clinton is being mentioned as the party’s possible 2024 presidential nominee. That potentially could set up a rematch against former President Trump.

Based on the reactions to her tweet, Clinton faces much work in winning over progressives.

BetterWorld2@Socrates091 responded to Clinton’s MLK quote with a quote from Malcolm X.

Back to Top
Close
X
Join Nnamdi Kanu's case against Nigeria, IPOB American lawyer writes US…Latest NewsPunchAmerican lawyer, Bruce Fein, has requested the United States of America to join the ongoing case between the leader of the Indigenous People of B…