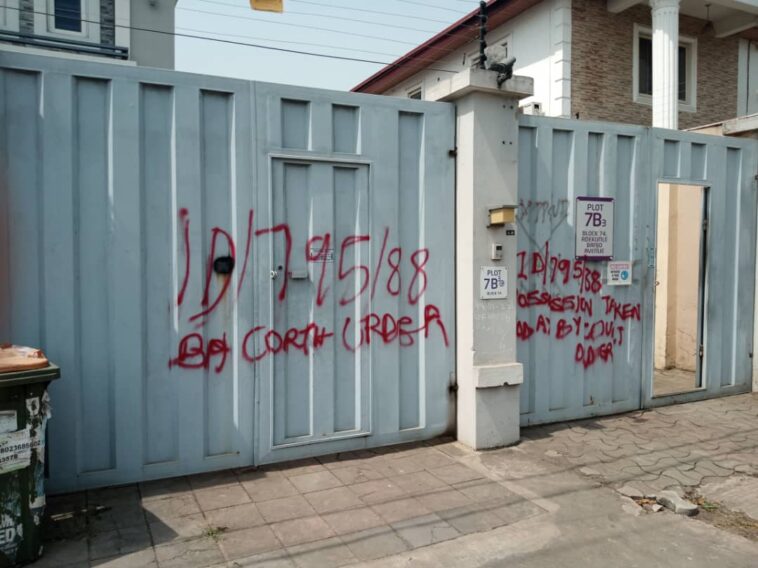 The house of representatives has resolved to investigate Abubakar Malami, attorney-general of the federation (AGF), and Usman Baba, inspector-general of police (IGP), over their alleged involvement in the invasion of Magodo estate phase two.

The resolution followed the adoption of a motion of urgent public importance sponsored by Ademorin Kuye and Rotimi Agunsoye, lawmakers from Lagos state, during plenary session on Wednesday.

On December 21, police officers and some suspected thugs besieged the estate and marked buildings for demolition, but residents protested the invasion.

However, the siege continued and residents sought the intervention of Babajide Sanwo-Olu, governor of Lagos.

The governor visited the estate to address the residents, and met police officers from Abuja who refused to vacate the estate even after Sanwo-Olu asked them to leave.

After some back-and-forth, the police officers eventually left.

The police officers had said they were at the estate on the orders of the IGP and Malami to enforce a supreme court judgment over the land.

According to the Lagos government, the case dates back to the demolition of properties at Shangisha village between 1984 and 1985, after which a supreme court verdict ordered the state to give the Shangisha landlords 549 plots of land as a “matter of first priority”.

The state had, however, said by the court verdict, the Shangisha landlords cannot lay claim to land at the Magodo estate as the matter only relates to “allocation” and not “possession”.

Leading the debate on the motion on Wednesday, Kuye, the lead sponsor, commended the Lagos government for making efforts to resolve the matter.

He, however, berated the IGP and the AGF for “getting involved” in the matter and “sabotaging” a peaceful resolution.

“Several attempts have been made by the Lagos state government from 2012 to 2015 to settle the matter amicably, making different engagements, with the judgment creditors presenting a proposal for reallocation in the Magotho Residential Scheme within the Badagry area of the state which some of them accepted,” he said.

“The Lagos state government again in 2016 initiated a settlement to reallocate Ibeju Lekki Coastal Scheme located in the Ibeju Lekki area, but this was rejected by the lead plaintiff, chief Adebayo Adeyiga, as the government continues to dialogue with the majority of the judgment creditors to reach a consensus towards implementing the judgment.

“Despite the ongoing settlement efforts and the pendency of an interlocutory injunction dated December 1, 2020, before the court of appeal seeking an order restraining him and his agents, chief Adeyiga, purportedly encouraged by the attorney-general of the federation and the inspector-general of police, stormed the estate with unknown bailiffs and armed security operatives to execute a judgment that was purportedly delivered by Lagos high court.

“The execution being presently…