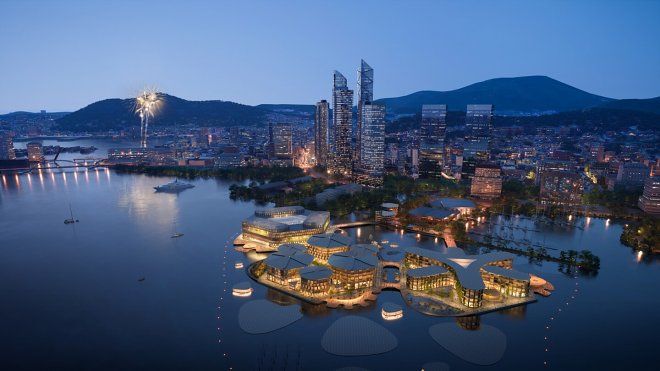 The world’s first prototype floating city that adapts to sea level rise has just been unveiled at UN headquarters in New York.

The plan was unveiled back in 2019, but it has only evolved since then. The project was named Oceanix Busan because of its planned location off the coast of South Korea’s Busan. It will be three huge floating platforms connected to the mainland, which will contain residential buildings, public spaces with restaurants, and science areas. However, the project could be expanded to 20 islands with a much larger capacity.

It would be the first-ever prototype for a sustainable community on the water. The linked 6.3-hectare neighborhoods will house 12,000 residents with 30,000 to 40,000 square feet of common-use space in each neighborhood. Floating platforms will be connected to the continent by bridges around the lagoon with spaces for recreation, creativity and concerts. The buildings will be made of sustainable materials, including wood, and placed in a special way to allow natural ventilation. The community will be supplied with electricity from solar panels, food will be grown in greenhouses, and water consumption will be minimized.

The project is scheduled to begin in 2023. Oceanix guarantees that the first phase of construction will be completed by 2027.

When built, the three interconnected platforms, totalling 15.5 acres, will provide homes for a community of 12,000 people.

It’s one of many solutions being found to the growing issue of rising sea levels.

Back to Top
Close
X
Deforestation on the rise as poverty soars in Nigeria…EnvironmentAkure-Ofosu Forest Reserve was established to help protect what is now one of largest remaining tracts of rainforest in Nigeria, and is home to many s…

X
How much would it cost to build an Egyptian pyramid today?…Special ReportUrgent News By Tiffany Tompson There are 138 ancient pyramids in Egypt. Most of them were built as tombs for the pharaohs, but there is also speculati…