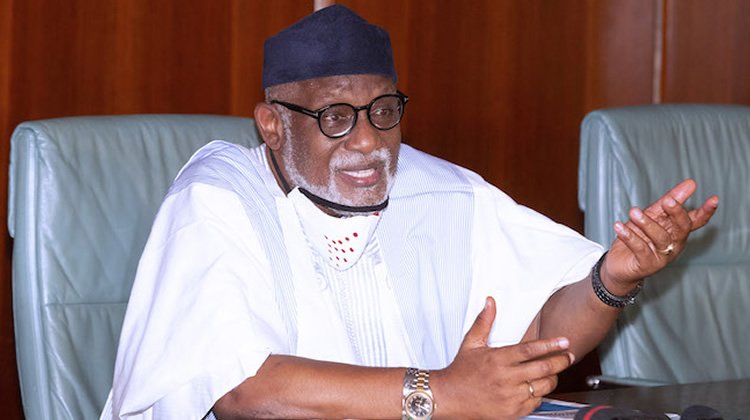 THE Chairman of the Southern Governors’ Forum and Governor of Ondo State, Mr Rotimi Akeredolu, has insisted that the southern part of the country must produce the next president of the country.

Akeredolu, in a statement on Tuesday, warned the national leadership of the ruling All Progressives Congress against giving the presidential ticket to a northern aspirant so as not to put the party in a crisis.

While the Southern Senators supported their governors, saying the presidential aspirations of politicians from the South were legitimate, the Coalition of Northern Groups described Akeredolu’s statement as a threat to the unity of the country.

The National Chairman of the APC, Senator Adamu Abdullahi, had on Friday in Abuja said the party had yet to zone the 2023 presidency.

But Akeredolu, in the statement he personally signed and made available to one of our correspondents by his Chief Press Secretary, Mr Richard Olatunde, on Tuesday, insisted that the presidential ticket must be zoned to the south.

He said, “The current democratic dispensation is anchored on the unwritten convention driven by a principle of equity. Political expediency dictates, more appealingly, that while adhering to the spirit and letters of the laws guiding the conduct of elections and succession to political offices, we must do nothing which is capable of tilting the delicate balance against the established arrangement which guarantees peace and promotes trust.

“Our party just elected officers on the established principle of giving every part of the country an important stake in the political calculus. The focus has now shifted to the process which will culminate in the participation of our party in the general elections scheduled for next year. All lovers of peace and freedom must do everything to eschew tendencies which may predispose them to taking decisions which promote distrust and lead to a crisis, the end of which nobody may be able to predict.

“The leadership of the party ensured that the principle of rotational representation guided its decision at the just-concluded convention. The party chairmanship position has gone to the North. All other offices have been filled on this understanding. This is the time the leaders of the party must make a categorical statement, devoid of equivocation, on the pattern of succession.

“The party executive committee has fixed a fee for the purchase of the nomination form for the office. It is expected, fervently, that it will proceed to complete the process by limiting the propensities for disagreement to a region for possible micro-management. It is very expedient that we avoid self-inflicted crises before the general elections.

“It is the turn of the Southern part of the country to produce the next President. The party leadership should have no difficulty in making pronouncement on this very important issue, just as it has fixed various fees for the purchase of forms. This must be done without delay. The principle of Federal Character is enshrined in the 1999 Constitution, as amended. It will be disingenuous for anyone to argue against rotation at this period.”

Urging the party leadership to speak out on zoning, he said, “We must not keep our party men and women guessing on the position of the leadership of the party. This is the time to weigh in and take control of the process. No statement must suggest, even remotely, that the party harbours certain sentiments which may predispose it to consider throwing the contest open. This is certainly not the time for equivocation. equity dictates that we take a stand.”

On his part, the Chairman, Senate Committee on Judiciary, Human Rights and Legal Matters, Senator Opeyemi Bamidele, said that the 1999 constitution captured the issue of rotational presidency.

Bamidele, who is also the Chairman of the Southern Senators’ Forum, said the agitation for the presidency from politicians of Southern extraction was legitimate.

He stated, “Let me state that Section 14 of the constitution and various sections of the 1999 Constitution, as amended, stated that no section of the country should dominate others in terms of positions.

“Let me also state that the primary concept of governance is welfare and good governance. The section emphasised that Nigeria shall not be governed in such a way that any particular section will have domineering advantage over others”.

The lawmaker, who spoke in Ado Ekiti during an empowerment programme for his constituents in the five councils in the senatorial district, spoke in the light of reactions that trailed a statement last week by the APC National Chairman, Senator Abdullahi Adamu, that the party was yet to zone the presidency to any zone ahead of 2023 elections.

“Though the constitution didn’t say specifically about rotation, but logically and through various judicial interpretations, allowing it to rotate is legal and constitutional.”

Another member of the Senate, Chukwuka Utazi (PDP, Enugu), also spoke on zoning, but as it concerned the PDP.

He said dumping zoning might mark the end of the opposition party in 2023.

A member of the House of Representatives, Rotimi Agunsoye (APC, Lagos), warned the APC against retaining power in the North as it would be counterproductive for the party.

Agunsoye said, “Of course, it has to come to the South. They cannot retain power in the North. They are doing their eight years. Fair is fair.”

When asked if it was compulsory for…